People need to stop showering together 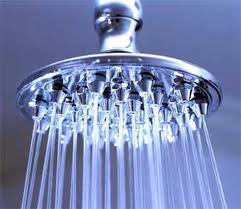 Unless you're with your husband or wife, of course.

I've been saying this for years.

And now this Penn State scandal is just one more incident that I refer to in underscoring why people need to have their own shower.  Really, isn't this just a guideline for basic decency?

When bringing up this issue before I've been told by many adults that I highly respect that kids taking group showers after school gym classes is simply a rite of passage as well as sports teams or soldiers in the military, etc..  I don't care when or where it is -- it's inappropriate.

Not only are group showers a perfect opportunity for sexual abuse by predators like Jerry Sandusky, they also create an atmosphere that hinders the building of self worth.

Group showers are a vivid memory from middle school.  Not skinny but not really overweight either.  Not over or under developed.  Just average.  Still, there were two days of the week I absolutely dreaded -- the days I had to strip down to nothing and stand in a shower with anywhere from 20-30 of my female classmates. All of us were totally nude with nothing but a small white hand towel that covered absolutely nothing to speak of.  You couldn't cover both private areas at once, so you took your pick of what to cover.  Then you raced through the shower, speed dried and dressed  which ironically resulted in feeling sweatier than when you started out.  The whole thing was really counterproductive.

There was a rule, if you were menstruating, you could ask the gym teacher for a private shower.  There were only 3 or 4 of those and a lot of times girls would just lie and say they had their period to get the private shower.   I never lied about it...because as much as I hated the group shower I just didn't think it was right. But I went on hating those two days of the week.  It didn't matter what we were doing in gym class, I never looked forward to it because I knew what followed it.

I didn't hate my body. I just didn't want to get naked in front of a bunch of people.

I don't have the perfect body today, but I'm really comfortable in my own skin.  For the purpose of making my point in this post I'll tell you that if nobody's home or it's just Larry, I have no problem being naked.  Sometimes my  husband tells me, "Um, Deanna, before you go out to the kitchen and get your coffee with no clothes on, please let me close the blinds so our neighbors don't see you!  (smile)   But if I were asked at this point in my life to strip down and take a shower with a group of my best female friends, I'd take a pass.

For some people, group showers torpedo their self worth.

For others who have healthy self worth it can simply be an experience that chips away at their dignity.

Still others such as Sandusky's victims experience a shower that shatters their innocence forever.

When, oh when is our society going to ban this ridiculous practice of taking showers with a bunch of people?   Whether you're 14 or 40, it's just not a wise thing.

Melissa said…
Completely agree. I HATED showering after gym classes. Let alone changing into gym clothes in an open locker room. Those years in school are tough anyway adding the whole showering without privacy compounds that.
9:54 AM

Dr. Deanna DossShrodes said…
I'm glad to see that I'm not the only one who values privacy.
4:28 PM

Connie Jo said…
I couldn't agree more! I also believe young men feel the same way but as most young people they "accept their fate" so to speak and just do as they are told. These kids are at a critical time of development especially in their quest for self worth. All it takes is just ONE person to really impact how a teen sees them self. I think privacy is crucial and schools should provide these kids witht he privacy they deserve.
4:44 PM

Anonymous said…
I don't see the big deal, personally. I agree with you philosophically that forced group showers are a bad idea. That people are crude. And that Jerry Sandusky is a pedophile.

But as a lifetime participant in sports, I have seen my fair shares of group showers. After the big game, before the 6 hour bus ride home... I am getting in the shower and could care less who is standing next to me.

Jerry Sandusky would have found a way to hurt kids outside of the shower. The group showers didn't make him see kids sexually... he already felt that way.

My teammates and I treated one another with respect and dignity. Some chose to shower, some didn't. It was not an exhibition of our bodies, a sneak peak of what should be saved for our spouses, or a degrading requirement.

I don't think group showers are the problem. Sin nature is the issue.
5:08 PM

Dr. Deanna DossShrodes said…
I appreciate your perspective on the issue and sharing your experience. Thanks for your feedback!
10:10 PM

Anonymous said…
I experienced mandatory showers five days a week in gym class from grades 6 through 12. My middle school and high school required all students to have a gym class all five days of the school week all the way from the 1st grade through the 12th grade.
And in grades 6 through 12 we were required to take nude group showers after each and every gym class with no exceptions other than while we had our period.

We were required to shower for at least five minutes. If the teacher felt that one of us did not spend a full five minutes in the shower, she would tell us to go back in for a couple of more minutes. She watched closely to make sure that everyone followed the rules.

I didn't experience too much embarrassment over the nude showering situation, fortunately.

But there was one awkward occasion. I shudder to think of how this would be viewed if it were to happen this day and age.

On the last day of school when I was in the sixth grade, all of the girls from the class were taken to a YWCA to go swimming. All of the boys were taken to batting cages and go-cart racing by a male teacher.

I have a feeling that if a teacher showered in the nude in front of her students today, that it would not go over well with some parents.