3 Things I Learned in the Desert

August 03, 2017
"You learn something new every day!" I wish I would have coined that phrase but of course I didn't -- it's an old one. Each day I look for opportunities to learn and usually learn more than three things. Yesterday was no exception as Larry and I spent the day at Joshua Tree National Park, taking in the sights. 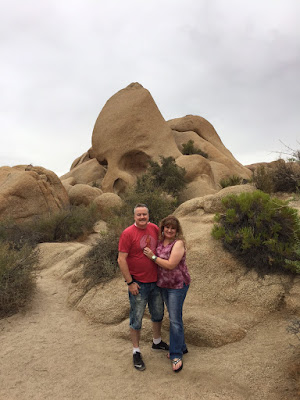 I had no idea what I was in for. I mean, I knew it was a desert, but oh my lands, it's the mother of all deserts! It's a desert on steroids. The first thing anyone needs to do is get yourself a Big Gulp before you go, because it will take you a minimum of two hours to drive through it. Don't let the word PARK fool you. This thing is the size of the state of Rhode Island. No, I'm not kidding. And it will take you two hours only if you don't stop at any of the exhibits along the way, which of course, we did. Speaking of a big gulp, the first thing I learned is this:

1) If you want to know where you should eat or drink, just watch where the old people are headed.

I talked a bit about this in my last blog post but it bears repeating. You won't find anything to eat or drink inside Joshua Tree Park. But, outside one of the entrances to the park there's a gas station that has everything from slushies to hamburgers.  I went in to use the restroom one more time before our journey and wanted an unsweet tea as well. This place had everything BUT the tea. And honestly, it didn't look very clean.  I couldn't believe the chaos down to the backed up line at the register and little kids running around begging their parents for candy. I sound ancient now, I know.

In the midst of this commotion what do I spy? There were a bunch of elder folk across the street. Why, pray tell? There is a lovely little coffee shop with freshly brewed tea as well as crafts for sale. And, it was clean as a whistle!. Why does anyone say clean as a whistle? Somebody's mouth was on it. And for all we know, it was not clean. So regarding the old folk, watch this and see if I'm not right! Older folk, they like good quality food made from scratch in an extremely clean environment. You could do a white glove test where the seniors eat. Despite the fact that nobody wears white gloves anymore. And it's quiet. Old people like peace. You will not be disappointed when it comes to food and drink, as well as the environment. Old folk were the first ones to say, for heaven's sake, SAVE THE ENVIRONMENT!

I acquired a mammoth iced tea and we headed for our jaunt through the wonderland that is Joshua Tree Park. 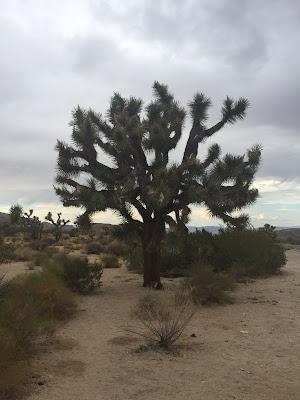 This is a Joshua tree. It got it's name because the first people who discovered the tree -- the Mormons bless their hearts said it reminded them of the biblical account of Joshua lifting his hands to the sky in prayer. It's interesting that all through our time of driving through the park, applications to the Bible were coming to my mind. Everything from the fact that the earth is the Lord's and the fullness thereof, to God being our rock. I also thought of Proverbs which says that it's better to live in a desert than with a nagging woman. (Proverbs 21:19) Honestly, the desert is beautiful. OF COURSE it's better than a nagging woman. It doesn't take a king to tell us that. Which brings me to #2...

It's awesome. Stop and get a drink before you go into it, and everything will be fabulous. Don't bring a nagging woman with you. 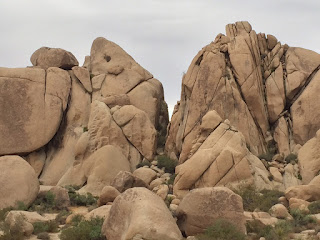 The gigantic rocks were my favorite part. It's off season here so there is hardly anyone around. Plenty of times Larry and I came to an exhibit and there was no one around. We could have gotten away with a lot. I was awestruck about how loud the silence was. I mean it was deafening. But in those moments, God spoke many things to my heart. I understand over and over how people hear Him so clearly in nature. 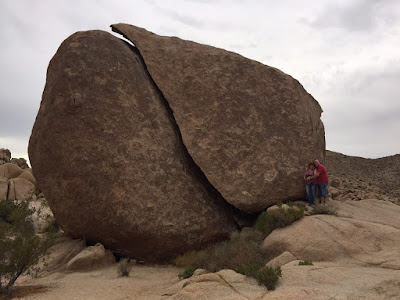 Larry and I are in the photo above but you can barely see us. Look at the size of that rock. The first person in history to see this had to shriek, "Oh my lands!" 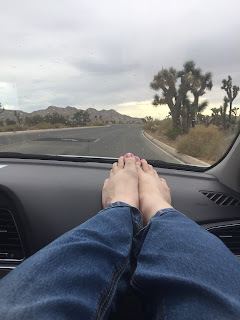 We took our time going through the park, stopping at most of the exhibits and getting out to take pictures. On the first day we arrived in California Larry and I made a California playlist on Spotify. We listen to it in the car every time we go to another place here. It's all songs about California. Everything from "California Girls" to "Hotel California." For yesterday we made a desert playlist. It had everything from "Desert Song" to U2's "The Joshua Tree" album. Which brings me to #3

3) If you want a great marriage, you have to plan for it.

And if you don't have a marriage and want one, put this on your #relationshipgoals list. I knew the importance of this before I went on this trip, but yesterday was a refresher course in why it's important.

As we were driving through the park listening to our desert songs, sipping our gargantuan drinks, I thought to myself, "I never imagined it would still be this good 30 years later..." I was reminded that a huge part of it is that we plan for it to be. None of this just happened on it's own. When it comes to memories Larry is as big a planner as I am, and many times even more. He always says, "making memories" is our family theme. I'm so glad I married someone who keeps this a priority.

Maybe things aren't the same in  your life and family, and you want them to be. George Eliot once said, "It's never too late to be what you might have been." I believe this applies to marriages and families too. It's not even about vacations or spending money - it's about getting a thought and following through with action to do something as simple as making a free playlist of songs for the one you love...listening to music together, or going on an evening walk together.

I learned all this and more in my experience at Joshua Tree. I hope all my friends get to see it at least once in their lifetime.