3 Things I Learned Today on my Birthday 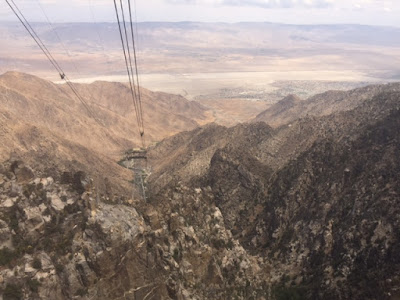 For sentiment sake, I'm writing a post about my birthday because I'll read it in a few months or years and look back on it fondly. Bloggers love reading our own stuff whether other people do or not. We're actually obsessed with our own words. We love seeing ourselves write as much as some people love hearing themselves talk.  It's the thrill of the post.

I woke up and got a cup of coffee and read some of Isaiah as well as I Samuel, and some teaching on leadership by John Maxwell. (In my house I have a painting of Jesus on one wall and John Maxwell on the other.)  While I was reading my husband brought me breakfast in bed. He's awesome like that. I try to reciprocate in ways that make him happy.

After savoring the breakfast I didn't have to cook, I began checking out the information from the first day of Revelation Wellness. It's a new program I'm trying at the invitation of my friend, Jodi Garvin. I started doing this partly because I believed if Jodi is doing it, it had to be legit. Jodi doesn't do anything "weird". She's a really stable person. The other reason is, if it had to do with physical wellness, weeeelllllll, I've tried everything else so why not this? (Don't believe me? Ask my niece Lexi. It's a running joke with her about how many diets and programs I've been on. If there was a Teen Challenge for eating, I would have already signed up for the program. For some people it's heroin, others are on crack, yet others of us are on Dunkin Donuts Chocolate Frosted.)

As soon as I signed up for this Revelation Wellness, I realized the first day was August 1, my birthday and it starts with a 7-day detox. I was like, NOPE...not having that revelation! No, no, no. August 1 is NOT the day of revelation or detox for me. But then I realized that it's not a 7-day detox that is food oriented. At least today it wasn't. Who knows what's down the pike on this thing but at least on my birthday, I was safe...

So, I woke up, and did everything we were instructed to do including the workout video. I don't mind working out on my birthday. Cutting out coffee with cream, now that's another story. Back up, jack! You might as well ask me to quit breathing.  I was once talking to someone who said something about giving up coffee and living more years. And I was like, "If I give up coffee, I really don't want to live anyway." To which my husband says, "You have a problem." Well yeah, who doesn't have at least one problem?

So, after the Revelation Wellnes workout video it was time to shower and get ready to  go to the Palm Springs Tramway. The tramway is the world's largest rotating tram car. It travels over two and a half miles along the breathtaking cliffs of Chino Canyon to the wilderness of Mount San Jacinto State Park. While we were riding in the tram car, it rotated slowly, offering picturesque and spectacular views of the valley below. Yes, it really was like that...it almost sounds like a professional brochure. Well it is, I stole that from the Tramway website. 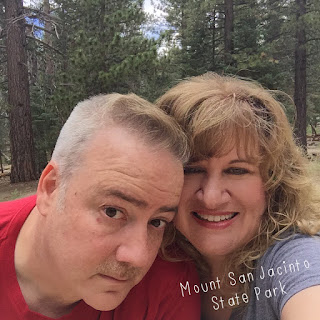 While the weather where we are staying in Palm Desert has been about 110 degrees everyday, up on top of the mountain it was about 65. Are you a man? Do you want to know what the change of life feels like for a woman? Just go to Palm Desert and stay outside for a few minutes. Yep, that's it You have now been baptized into menopause.

It was absolutely breathtaking! We did have to watch out for a few things along the way... 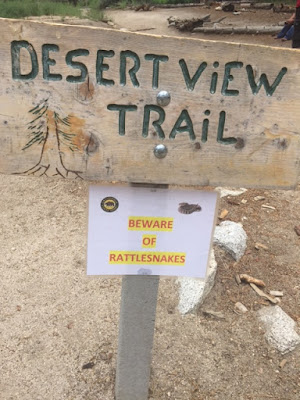 I was definitely watching with every step I took. Snakes are not my thing. Even though I'm Pentecostal. 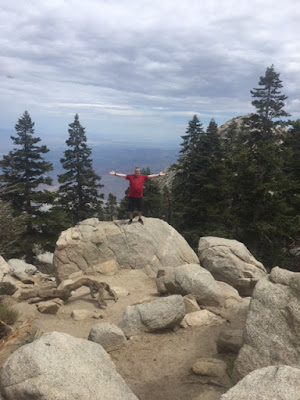 My husband enjoyed being King of the mountain! 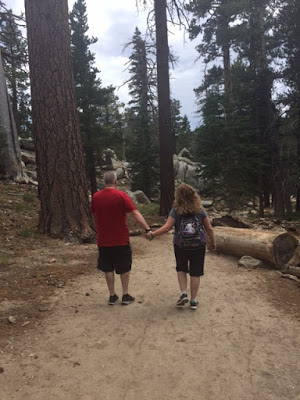 We enjoyed walking along together... 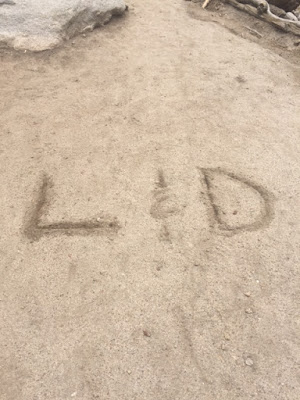 We let it be known we had been there... 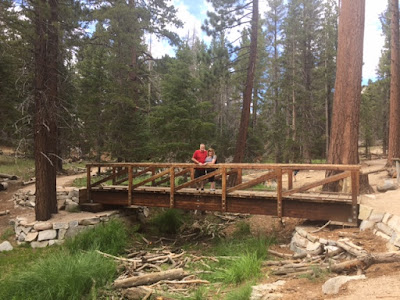 Some nice passersby took our picture for us...and we returned the favor. 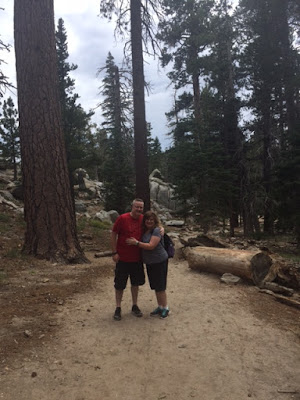 Stopping along the way for a photo here and there was a welcome thing, as we had a few mile journey. (All my fitbit steps for the day!) 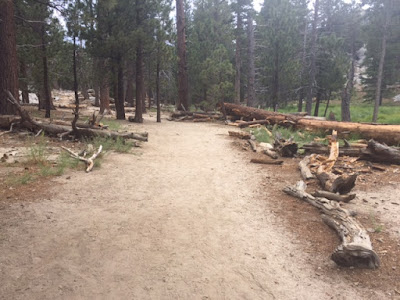 After a few hours our journey came to an end and it was time to take the tram back down the mountain. 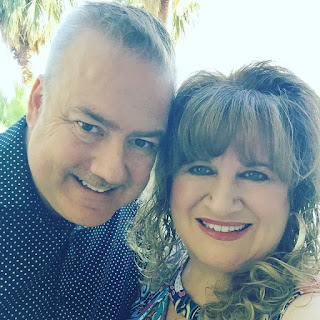 It was time to go back to Palm Desert, take a shower and get ready for dinner.

I forgot to take a photo of my dinner. (I was more interested in eating it. It was a fabulous piece of prime rib! I didn't feel a bit guilty having just hiked for several hours plus that little Revelation Wellness workout.) 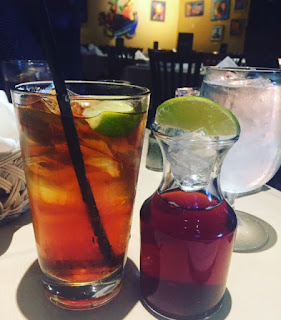 I did take a photo of my iced tea, however. No sugar at all, real or fake. I know that's a sacrilege being that I live in the south. But bear with me, it's one of the only sacrilegious things I do in life. That and preaching from the Message Bible occasionally. So, the reason I loved this and took a photo was the server brought me a carafe of tea to refill my glass as well as another lime, when she brought the first glass of tea. Yep, little details like this amuse me. I'm all about details. This has driven a lot of people who have worked with me to the nuthouse, or the altar or both.

Throughout the day went through about 500 posts on Facebook of friends and family wishing me a great birthday. I read every single one of them and thanked God for all the people who posted who make my life so filled with love.


After dinner it was time to come back to our home-away-from-home in Palm Desert, to get in our jammies and snuggle and watch a movie.

And oh yeah -- I forgot that along with all this, we fit a stop to Jack in the Box in for lunch. Don't judge. Now Jack in the Box would be another addiction if I lived out west. Apparently God knew he could not put me out west possibly for that reason. That and the fact that Larry and I don't drink. Alcohol that is.

Each and every day I try to learn something new or have a takeaway. So here are mine for today...

1) It does a person a world of good to be outdoors! I am seriously considering doing something outdoors for every one of my birthdays from now on. A walk outdoors cures a lot of what ails you.

2) Older people give some fabulous advice.  They aren't always right (who is?)  but many times they are. After church on Sunday here in Palm Desert, Larry and I met a retired couple who live here. Larry asked their advice on where to go while we're here this week. They recommended the Palm Springs Tramway and the restaurant we went to tonight. They said, "Their prime rib is out of this world!"  They were right. Listen to old people. They know about great things like the best places to eat, and other things that will save you a lot of time and trouble.

3) Revelation Wellness doesn't make you give up coffee. So far so good. Maybe you'll wanna try this?  It's a program that doesn't make you drink your coffee black or cut it out. So far I'm liking it.  (Lexi, stop laughing!!!)

On to another year of savoring as much coffee and life as possible.