What Choice Do You Have Regarding Change?
(Besides a Nervous Breakdown) 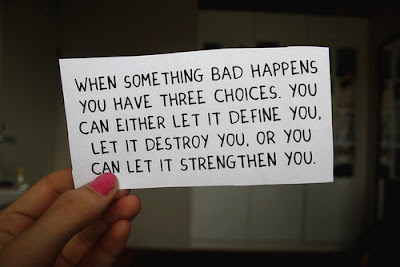 The biggest choice people throw away is the choice to manage themselves.

How often do other people make a choice that affects you, and you respond by drowning yourself in all the wrong things? I've done it too many times to count.

Every person has the right to manage their own health. This is about making the best decision for yourself. This might include (but is not limited to) eating right, sleeping adequately, solitude, taking vitamins, seeking natural treatments, taking medication, being under doctor's care, and of course spiritual disciplines.

Regardless of what other people do, don't throw away your choices.

Decisions come all the time that I don't particularly like or enjoy. Sometimes ones come that rock my world. And to that I say...

Time for a bike ride.
Time to take a day and go off by myself.
Time to be quiet and meditate on the Word.
Time to sleep a little more.
Time to go to the health food/vitamin store and look at what's available.
Time to take the Visa gift card someone just gave me and use it for a massage.

I used to get so upset about unwanted changes thrust upon me that I did nothing but emotionally thrash around. I was too upset to notice other options that were still mine.

Okay, so you don't have a Visa gift card. Sometimes I don't either. Walking is free. Do it. Get out there.

A few years ago an idiot rammed into the back of my car when I was sitting at a red light. It was a  Mustang convertible my husband bought me for my birthday. My very first car after 38 years. A lot of sacrifice led up to that car. Too much to tell you about here. I will just say that my husband told me that due to us co-pastoring for all the years we did together from the beginning of our marriage, we could never afford two cars. He said when he could eventually get me one, it would be worth it all. It was. Oh how I cherished that car for all it represented. Just a year before getting that car, when our family would go to McDonalds we would get one large drink and five straws, and share. When an increase came in our finances we could finally stop doing that, and get a car for me too.

He asked me to pull over into the gas station across the street since we were blocking traffic with the accident. I believed the best in his intentions to stop blocking traffic at a busy intersection and agreed and when we got back into our cars, he sped away. I only got half his license plate and cops can't find someone on information from half a license plate.

We were stuck with the bill. I sat and cried profusely in the lot of the gas station.

The police thought I was badly injured I was sobbing so hard. I reassured them I wasn't physically hurt, just really suffering emotionally.  They said there was nothing they could do and little hope of finding the driver. I went home with the desire of eating ten hot fudge sundaes although I recollect only eating two.

The truth was I knew it would be a long time until we could afford to fix the car.  Unfortunately it took a year and a half. I had to drive around with a smashed in rear end all that time. It kind of takes the zing out of driving a Mustang when people see the beautiful front end of your car and as you drive away they see a jacked up rear end. I didn't have much time left to really enjoy the car in all it's fullness because shortly after it was finally fixed, it was totaled in another accident, not of my choosing or decision.

This is what ultimately became of the car I had named Joy Gratefulness Shrodes: 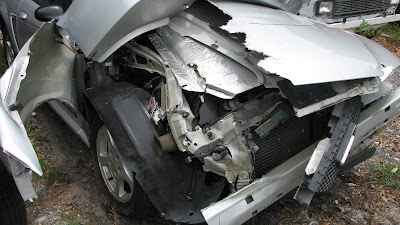 I can't even describe to you the emotions I went through. I'm a writer but still it defies adequate explanation. As for the first hit-and-run driver, I used to call him, "Mr. RFK" since those were the first three letters of his license plate. I used to say if I ever saw him in public we'd not only have a hit and run to deal with, but a murder or at least a really severe assault and battery. LOL

To this day I haven't been able to get another car. It's been five years. In case you are interested here is my car's obituary.

So what did I do with all this rage? Well, I decided to go to the gym. Every day. I did an hour on an elliptical machine every single day for many months. I pedaled as hard as I could to a song list I made that was specifically designed to help me get all my anger out.

It worked. In a matter of months my rage was gone and I had the best legs I've ever had.  I'm sure people at the gym thought I was crazy at times, pedaling like I was fixin' to kill somebody. It was what I needed at the time. I'd pedal out my rage and talk to Jesus.

Choices. They are so important.

Someone else's choices don't take away all of your choices. Maybe you just needed a reminder that you still have control of you.

You can still do something positive. What will that something be?

Even Jesus gave you that control. If you don't believe it, read Galatians 5:22-23.  Self control. There it is. Now go do something with it!

How can you exercise self-control to bring a better outcome in some way, for you?

Whether you pedal on a bike every day for the next year to get it all out, or start a new bible study, or you take St. John's Wort, or you do aromatherapy, or you get a massage, or you make an appointment with your doctor...just do it. Do something.

Now is not the time to thrash around emotionally. It's time to focus on something positive at your disposal. It's time to counteract the choice someone else has made with your own choice - one that's good for you.

The ball is in your court.