Are you talking to the right people?

What a revolutionary thought!

This didn't come out of my head -- I wish it did. It's brilliant. But I have to give credit to T.D. Jakes, one of my favorite preachers. Larry taped an interview for me the other night -- Oprah had Jakes as her guest on a special that she did. I couldn't wait to watch it and sure enough, it was rich with truth. He just has a way of cutting to the heart of an issue every time.

Here's what he brought forward that was so eye-opening, and really it goes along with what I've been experiencing with the "four steps."

He said that when we have conflict or hurt in our lives and we don't discuss it with the person who caused the pain, we will always end up having "that conversation" with somebody else!

Many times we take out on other people that which has nothing to do with them, and that which they can't change or heal!

I realized a few important things after watching that show. I hope my takeaways will help you too. 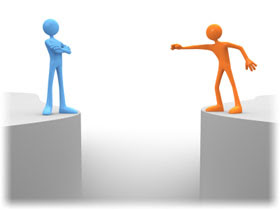 1)  Sometimes I have had "the conversation" with people, we seek mutual understanding and it goes well. Thank God for those occasions!

2)  Other times I have had "the conversation" with people  and unfortunately, they didn't want to hear, listen or seek to understand. These qualify as some of the most painful moments of life.

3) In the biggest case of pain in my life where this occurred, I now realize that to try to re-hash the conversation while they didn't seek to understand (or even lied to me) only hurt worse and didn't change anything. Continuing to try to have "the conversation" with a person like this only adds more pain. I now know that moving on after the conversation, and seeking healing between God and me was the right thing to do.

4) Some people struggle with a conversation they should have had with someone who died. In this case I believe it would be productive to write out feelings in a letter to that person, or even have a one-way conversation, imagining them in the chair in front of you, getting out your feelings.  If we don't have a one way conversation like this directed at the one who is gone, we will probably end up re-hashing it with a bunch of people who are still alive, and doing damage to those relationships.

5)  All of this makes me realize that when things happen I need to make sure I'm having "the conversation" with the right person so everyone else in my life doesn't needlessly suffer from pain somebody else caused.

Jessica Smith said…
Great post Deanna!!! Got me thinking!!! Always a joy to read it with my cup of coffee in the mornings.
11:42 AM

Dr. Deanna DossShrodes said…
It's a joy to me that you read, my friend. I know that if I get anything psychologically off, you can reel me back in...lol. I love you, lady!
1:51 PM