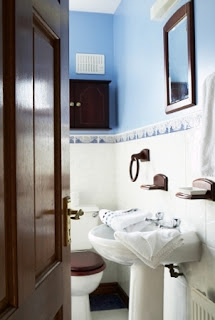 Turning the television volume all the way up in my bedroom, I quickly dashed to the bathroom, leaving the door open, so I could pee after holding it for almost four hours.
I didn't want to miss even one moment of the Whitney Houston Homegoing service. Like millions around the world, I was practically glued to the television that Saturday morning, taking in every moment of the service, from Kevin Costner’s unforgettable remarks to Bishop Marvin Winans powerful message.
My TV was so loud it drowned out the sound of the flushing toilet and water swishing in the sink as I washed my hands. Drying them and running back to the TV, I  managed to keep a watchful eye online. Friends in other countries were posting status updates on Facebook. They were tuning in as well, and gave a running commentary on the service. Without exception all of us remarked that the tears were streaming down as I Will Always Love You began to play and Houston’s casket was wheeled down the center aisle of the church.
Cissy Houston’s bold decision to have the funeral at New Hope Baptist Church in Newark, NJ brought the whole world to church that day. 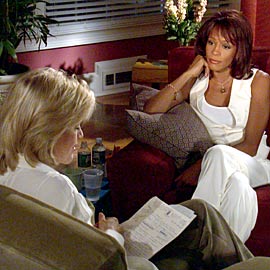 Being a long-time fan, I have every project Houston has ever recorded and a DVD of every movie she’s made. Her music was the soundtrack to my teenage life. Perhaps this is why her and Michael Jackson's deaths were both so unsettling to me.  Their music means so much to our generation.

Along with countless others, I prayed prayers that she would win the battle against her demons, as she called them. In a 2002 interview with ABC’s Diane Sawyer, Houston said of her struggles, “The biggest devil is me. I’m either my best friend or my worst enemy.”
Like many others, I was hoping against hope that when the toxicology report came in it would reveal no current drug use as the reason for her death. I really believed her when she said she was clean in the last interview she did with Oprah Winfrey. All of us who were fans wanted so much to believe. But on March 23 we all learned the truth – cocaine and heart disease were responsible for her accidental drowning in the bathtub at the Beverly Hilton.
An outspoken Christian, Houston shared openly and often about her faith, and about her weaknesses as well. Some Christians and non-Christians alike questioned the validity of Houston’s faith if indeed she perished from drug abuse. It was only hours after her death that I began to get private messages from a few of our church people asking my thoughts about this.  I also noticed that my facebook newsfeed was full of comments from people of all walks of life, regarding where they thought she might have ended up. Everyone had an opinion, that's for sure.
Here's what I believe. Addictions do not determine one’s faith or lack thereof, nor can they be used as absolute proof of one’s eternal destiny. However, they do rob us of our quality of life. And, if the battle against addiction is not won, it can take our very life, as evidenced by Houston’s death.
Millions myself included grieve that we will never hear her voice live again on earth, that there will be nothing new from “the voice,”... the “National Treasure” as Oprah Winfrey calls her. What can we do now beyond the grief, and extending prayers to Houston’s family?
We can learn.
It was jarring to me that Houston was only a few years older than me when she passed away. Although my kids think I’m ancient, they’re mistaken. These days, life for many in their forties and fifties is just starting, as people often enter into the greatest season of their lives and careers. This recent post by Seth Godin echoes many that declare that fifty is the new thirty. Houston was just 48.
I don't do cocaine. But I have some demons of my own. I have always struggled with eating habits that could lead to my demise if I don’t get them under control and keep them there. This coupled with a habit of allowing an unhealthy level of stress to exist have always been my “”demons” if you will.
We need to do more than gossip, grieve, shake our heads with a tsk tsk, or say, “I told you so” to the toxicology report. Let’s learn.
My takeaway from the loss of Houston is that I don’t want to lose the battle with my own demons. And the thing is, like Houston, we have a choice.
We can confront personal demons or deny them.
We can ask God for help, or we can refuse what He has to offer.
We can invite those in our inner circle to help us, or we can go it alone.
Each of us is a gift to the world – a treasure to those who surround us in our circle of influence. How tragic it would be for our quality of life, or our very lives to be taken from us because we allowed our demons to win?

Houston lost the battle with her demons. 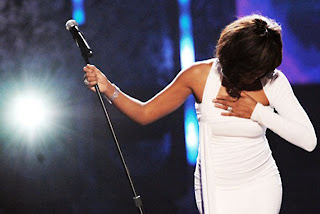 Love yourself enough to win yours.
Fight back.
Fight some more.
Don’t give up!

Terri von Wood said…
Exactly...Deanna. Thank you for the correlation. It may be worse that what she did was illegal but if we ask ourselves how we are treating our personal Temple of God...it gives me pause (to say the least!) :) Pause before I eat...pause before I collapse on the couch after a long day instead of taking a few more steps to my exercise bike...you get the picture! Thank you!
5:41 PM