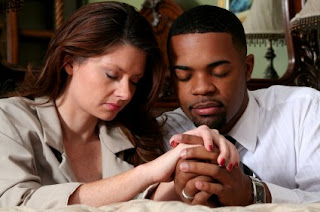 This is day two of the marriage series. You can see yesterday's post here.

God desires that we be "one," not only physically, emotionally and financially, but spiritually.

When God unites a man and a woman in marriage, He desires that we become one in all things.

There is a lot of spiritual warfare involved in marriage. Two things go together very strongly in this equation: prayer and sex. God tells us to make sure we are fulfilling each other sexually, abstaining from sex only for a very short time to devote ourselves to prayer.

I realized more than ever the importance of this a few years ago when I was working on a project at the church one night. Larry came in and asked me if I was ready to leave and eat dinner. I had been working with another church member in the sanctuary for several hours on a project and I told Larry I was hungry but couldn’t leave until we were done. He volunteered to go down to a local restaurant and pick up some takeout and bring it back for all of us at the church. He ordered it by phone then went to pick it up. When going in he was instructed to pay the a waitress in the bar area where the food was waiting. Upon doing so, the woman at the cash register said...

“Hey…I’m getting off work here in about 30 minutes…how about if you stay and we can have a few beers together?”

“Well, that wouldn’t be a good idea for two reasons. First of all, I’m a happily married man. Second, I’m the pastor of Celebration Church, here in Tampa.”

“Oh, I know…I was there on Easter Sunday.”

There are a ton of visitors at most churches including ours on special days like Easter and my husband had no idea who she was. But she had Larry marked when he walked in the door. She knew exactly who he was and overtly made a pass at him.

There is a destiny for your marriage, and the enemy will repeatedly put assignments on your marriage that must be canceled. You must remain in vigilant prayer and pull down the strongholds. It is not just the minister’s marriage that is under attack, but all marriages, because God has a plan for all of us. So what does this amount to? You have to pray and play!

Do you see how dangerous this situation could have been if I was not meeting my husband's needs sexually and if I was not praying for him and for our marriage?

Prayer is intimate. That's why some people are afraid of it. But if we want to go deeper in intimacy in our marriage relationship we need prayer. Listen to this incredible statistic from the National Association of Marriage Enhancement: One out of every two marriages in the United States ends in divorce. However, only one out of every 1,150 couples who pray together on a regular basis get divorced!

Prayer is a major key not only to divorce prevention, but to marital happiness and to sexual satisfaction. Many couples are afraid to pray, especially out loud. Or they say, "We never have time to pray. Something always comes up." Well, of course it does. The enemy makes sure of that because he knows how dangerous it is to him when you start praying! There will be no end to distractions. My encouragement to you about the fear aspect is to go slowly and don't have unreasonable expectations especially when starting out. You can start out with a one minute prayer, very simple, conversational prayer with God, about your relationship. Take a moment to ask Him to bless your time together, and thank Him for the blessing of one another.

God designed us for intimacy in three ways: body, soul, and spirit. In Genesis 4:1 when it says that Adam "knew" Eve, the word "knew" is the Hebrew word "yahday" which means intimate knowledge. It is an intimate knowledge of one another in all ways. Let me tell you that the enemy hates it when you are united not only physically, but spiritually. You see, when you are a praying couple, and you have the physical union to back up your prayers, the enemy knows you are unstoppable. You are unbeatable. This is because you have guarded yourself against temptation and joined together not just in one way but three…body, soul, and spirit.

I Corinthians 7:2 tells you, "Do not deprive one another except by consent for a time that you may give yourselves to fasting and prayer and come together again so that Satan does not tempt you because of your lack of self control." (NIV) It's something of a mystery as to what happens when couples pray together. There is an intimacy -- a depth you can't even imagine (until you try it) when you take your partner in your arms and ask God, the Creator of the universe, to bless your relationship. When you address your deepest feelings, needs and desires to the one who created you, as you love the partner He gave you…there's nothing like it. Regarding problems in your relationship...why don't you take it to prayer first? Even the details about the most intimate problems within your relationship should be taken first to God in prayer. Sincerely bring the issue to Him and I assure you that in many if not most cases, it will be resolved. There are some things that won't require a counselor or pastor's help or guidance. Prayer does change things.

There was a pastor who got tired of doing so many hours of marriage counseling and seeing the same people with the same problems spinning their wheels. It seemed the couples did not experience any lasting or real change. He decided to do an experiment. He told those coming for counseling that the sessions would take two hours. When they arrived at his office, he redirected them to the sanctuary. He told the couples that they would spend one hour in the sanctuary praying, after which they would come to his office for the second hour which would be counseling with him. Amazingly, after the hour of prayer in the sanctuary many of the couples came to the pastor's office and told them they no longer needed to meet with him. God had given them the answer in prayer.

This may sound very simplistic to you, but I assure you that prayer still works. Anything is possible with the Holy Spirit's working in a marriage…and liberal doses of humility and forgiveness.

LAURIE said…
Beautiful. Very wise words here. Prayer needs to be at the top of the list. Are our marriages worth it? -Laurie
8:31 AM

Anonymous said…
Now it's time for me to be convicted...yikes...I know my husband and I need to spend more time connecting in BOTH areas. Until I got married, I never understood how a couple could go so long without praying or having sex - when we were dating, we prayed all the time and were counting down until we COULD be intimate.

But it is true - those are the two areas where the enemy likes to attack married couples, and he will do everything possible to keep those two things from happening...

Deanna Doss Shrodes said…
Shari,
I believe you will have another chance someday...a second chance but in a different way.
Love you
2:35 AM