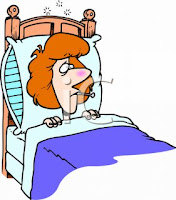 Just sittin' here by the vaporizer having taken 2 Alka Seltzers, trying to get better for church in the morning. I'm really expectant over what God will do ~ I just wish I didn't have this stupid cold. It would be nice if God would heal it RIGHT NOW. I have so much to do and no time to be sick.

Had a glorious weekend in Orlando. God had the women there who needed to be there. It was such a NOW Word, it was amazing. Literally every single message built upon the next and it Uh-May-Zing! All of our speakers spoke of being in the end times and the urgency of being intentional women for God, and not wasting time because the days are so evil. It wa such a prophetic weekend. Very powerful. I'm still processing it all.

I did a lot of sleeping in between sessions and only went out with my friends to eat one time because I was feeling so bad with my cold. I also had coffee quickly with Judi Cotignola this morning...well, not really "had coffee" ~ we walked to Starbucks and chatted on the way there and back, and how I wish it was more, so much more. We've committed to get together sooner rather than later. It's so important to keep up on friendships in the ministry. They are what helps you get through and not just survive but thrive.

I am not alone in my urgency of prayer right now. A lot of people are feeling the same thing. It's time to get on our faces like never before and seek the face of God to touch our nation once again. He's got to judge us, or rapture us soon or he's going to owe an apology to Sodom and Gomorrah. Jesus, help us.