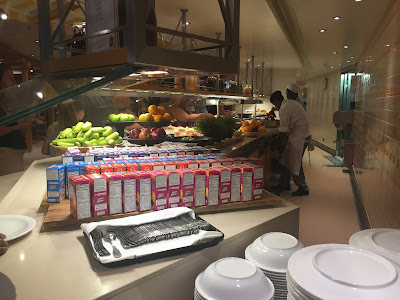 Recently on our family cruise my husband and I were waiting in a long line for the breakfast buffet. I began to get rather frustrated with the people in line. They were moving as slow as molasses. I’ve never tested how fast molasses really moves, but you know….

What  irked me was that this line as long as an anaconda did not have to stay that way!  People moved in slow motion as they reached for a grapefruit or selected a box of cereal. They seemed to be giving serious thought to selecting a sausage. I wanted to scream, “What’s wrong with you people? It’s sausage. This doesn’t require an executive decision. Grab and move! Grab and move!”

I quipped to my husband, “For a person who is on the move, this line that is not on the move but could very easily be is rather frustrating.” He gently said back to me, “Babe, you’re not supposed to be on the move this week. This isn’t the week to rush anywhere. Just relax.”

I will admit that was hard advice although I knew he was right. And, I will also admit I could not just stand there and “waste my time.” In my previous life I was World Director of Productivity. So as people in front of me took their sweet time, I took it upon myself to rearrange and straighten items in front of me like small cereal boxes and butter pats that were not in perfectly straight lines. I thought my husband would die.

On the same day, I decided to stay on the ship while my family all went on excursions. I was sorely in need of a day of rest. My testiness at the breakfast bar proved that if nothing else.

Especially with some things I have faced in this season, I need to be intentional about taking some time to breathe. Breathe again. Not have to think so quickly on my feet. Not be the answer person. Not make any decisions. Not solve a problem. Take some moments to just be. Make a “stop doing” list.

Leaders need to be relentlessly intentional about moving slower on some days so we can keep moving faster on others.