What Communicators Can Learn From Donald Trump
(You Can Learn Something from Everyone!)

“What is the fascination with Donald Trump?  I don’t get it.  I’m stumped about what people – especially Christians, see in him, and why so many are following him.”

I see a variation of this statement on Facebook at least once a day.

Donald Trump isn’t my candidate.  My choice has already dropped out. This post isn't about my choice for president, for quite frankly I'm undecided.  Many say it's going to come down to the lesser of two evils, come November 8. I don't believe that. I believe what we will eventually be faced with is the evil of two lessers. But I digress...

The goal of this post is to not to promote anyone. I want to share my thoughts on the fascination factor as well as give those who preach, as well as anyone who communicates publicly -- something to think about.  I'm a firm believer, we can learn something from every person and every conversation. The lessons from Trump are rich, pun intended.

There are two reasons many people have chosen Donald Trump as their candidate. There are others I'm sure, but these are the two main ones that I see.

Nuttle brings the point forward that when you pick up an apple out of a barrel of apples and it's rotten, do you choose more from that barrel? Probably not. You’ll select a whole new barrel to get your apple from. Because if one is spoiled there are probably more to follow. And you don't want to take a chance. People want to avoid the barrel with the spoiled apples. So they go to the one candidate who is not only outside of the establishment, but scares the establishment out of their minds. If a candidate frightens the establishment, that is a confirmation to many, “This is our man!”

Now, many believe the American people are simply going from one barrel of rotten apples to another, if they choose Trump. But others aren’t convinced.  Have you ever heard the saying, “Better the devil you know than the devil you don’t?” It simply means there is less apprehension when you already know what you’re dealing with even if what you are currently dealing with is horrible. The American people know what they have when it comes to the current establishment and according to statistics, most are sick of it.  (Last night, out of curiosity, I looked up the latest Rasmussen poll and it appears at this moment, only 27% of Americans polled believe the United States is headed in the right direction.)
Second, and here's where communication comes in -- Trump speaks from the heart. Many people point out – it’s a bad heart. That may or may not be true.  I truly don't know - I'm not his judge. Never-the-less, what I can see is that he speaks extemporaneously, not in polished sound bytes. People underestimate the huge value of that. Sorry, the YUGE value of that. People respond to heart-speaking, as I call it, for good or bad.

Years ago in pastoring I was perplexed when my husband or I would deliver a message or vision cast and somebody in the congregation would come up to us afterwards and say, “I really want you to share your heart…” or “I’m looking forward to pastor sharing his/her heart…” or “I think the church really longs for you to share your heart…” and I’d think, “What do you think we just did???”

Being an established leader now versus a rising one, I realize what the people meant by that. They were saying, “When are we going to hear you share unscripted? When are you going to step away from the pulpit, get away from your notes, look into our eyes and speak into our hearts?” 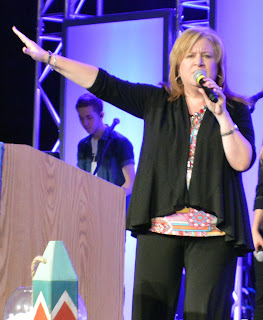 Everything changed years ago when I read Andy Stanley’s book, Communicating for Change: Seven Keys to Irresistible Communication. I recommend it to anyone who preaches, or for anyone whose vocation is communication. It was the most helpful resource I've ever read on the subject and I continue to read it now and then as a refresher.

I started heart-speaking and it made all the difference.  Let there be no misunderstanding -- I don’t wing it. I study and prepare notes, however when it comes to the time to actually deliver, I either don’t use them, or I use them only as a touch point. A touch-point for me is when I come back to the pulpit to quickly touch base – read the scripture and glance to see what my next point is before I step away again, look into the people’s eyes and say what’s in my heart.  And if I'm presenting a vision casting I never use any notes - at all. I've found more than ever in those moments, it's important to maintain eye contact the entire time.

I’ve noticed that much greater response comes at the conclusion when I speak 20 minutes from my heart than 40 minutes of sharing a scripted presentation.  (Yes, I know that is also largely a result of prayer! But I have seen the results with prayer, and both methods of communication. Prayer along with heart-speaking wins every time.) The exception for me would be when I'm asked to present a workshop or seminar where 50 minutes to an hour of speaking is requested and there are a lot of statistics/details that need to be covered. In that case, I utilize notes more. Even so I try as much as possible to step away from them as much as possible.

We also see through Trump's example that the pre-requisite for people to follow you isn't an uncomplicated, perfect life on display.  Prettying things up isn't necessary to relate to people in fact, it can actually be a detriment.

How does this translate to preaching?

If I am introduced and begin a message by saying: "Good evening everyone. I'm  Deanna and I'm honored to speak to you tonight. Before I begin my message I want you to know, I've written four books that are out on sale in the lobby.  I share many principles of success in these books and you might want to pick them up, not only for you but for a friend. Tonight we've got a special sale going on if you purchase the entire collection. Be sure to make your way to the product table after this session. I'd love to sign your book for you. Alright, let's open our bibles to Matthew 6:25..."

Nobody gives a rip. Well, I mean, if one of my best friends were there they might respond.  But few people in the audience would care about what I just said.  Why should they?

If I am introduced and begin a message by looking directly into the people's eyes and saying, "Good evening everyone. My name is Deanna. There was a time when I had so much overwhelming anxiety in my life, I bit my nails   until they bled every day. I had so much fear I would toss and turn until three or four in the morning. I never imagined myself being free of any of this!   And then one day, Jesus did a work in my life. He can do it in yours too! Maybe you can relate to this. Right now, you are wondering if you can ever be free. God sent me here with a message for you tonight, my friend.  You can be free. If you have your Bible, turn with me to Matthew 6:25..."


Everyone is tuned in. Not only that, some won't even wait until after service to friend request me on Facebook. They will say, "From the first few sentences of your message, I felt like I had known you forever..."

People have little time and attention span for those they sense are full of pretense. And they want to know, "What's in this for me?" When you share transparently from the passion deep within about something that affects their life - they move close to you.

Communicators can learn from Trump that a flowery speech and a perfect life isn't a must - but transparency is, as well as talking about the issues that matter most to people. To say Trump is crass in some of his debates, press conferences or interviews is an understatement. And, to everyone's amazement, the more uncivilized he is the more people eat up what he says. When someone who heart-speaks about important issues  but does so in an uncouth manner gains millions of followers, what could we accomplish through heart-speaking in an integral, loving way?

Many people can’t understand why Donald Trump has won the hearts of many in the Christian community when he has a prideful, unrepentant, and angry heart. The answer is, they are clearly willing to take a chance on a bad heart as opposed to a heart they have never heard.