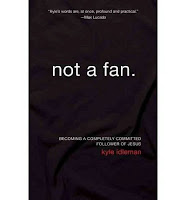 Last night at our church we started a new series called, "Not a Fan" based on the book of the same title by Kyle Idleman.

This question was asked all of us last night at church after the first video clip was shown:

"If you suddenly died, and family and friends were asked for one thing about you, what do you believe they would say? How would you feel about that? When you do actually die, what would you like people to say then? What kind of life, what kind of changes or decisions, would it take in your life for people to actually make those kinds of comments about you at the time of your death?"


I have thought about legacy a lot the past few months.
It has become very important to me, what I'm going to leave behind as a legacy to my children.

It gripped my heart immediately in the first video segment when a husband/father/friend died and his family and friends were being asked by the pastor performing the funeral what they remembered him for. His daughter immediately spoke up and said, "He took up for people...He spoke up for  those who couldn't speak for themselves."

Interestingly enough, that's exactly what I want to be known for.

Living (BOLDLY) for God.
Living real.  (NO secrets!)
Being a loving Mom, at both home and church. (With both my natural/spiritual children.)
Writing and speaking for worldwide change.