The Teacher Who Told Me to STOP Writing

Now, let it be known, I love teachers.

Teachers are my heroes. Throughout all of my schooling, I only had two bad ones. That's a 98% success rate for all my teachers throughout all time, so that's pretty darn amazing. I've blogged about a lot of the 98, singing their praises, and today I'm going to share about one of the two from hell. Because now I'm an adult with a voice and I can.

When I was growing up we didn't have a whole lot of money. We weren't dirt poor but we weren't rich either. I would bring home those Scholastic Books order forms all the time and beg to buy a bunch of books and usually my parents would say we didn't have the money to order. Occasionally they would say yes and I would feel like the greatest thing ever just happened. One time I actually got to order two books at one time. I never forgot that. Best. Day. Ever.

My parents took me to the library on a fairly regular basis but I rapidly reached my book limit. Despite checking out twenty or more books at a time, I would finish with all of them in just a few days, with nothing left to read. At that point it was back to the encyclopedias or Shakespeare until we could go back to the library. My grandmother who lived across the street had a tall bookcase in her hallway of her home. I would go over to her place and lay in the hallway reading, devouring every book on her shelf as well.

My parents learned that being sent to my room was not a punishment. I craved the solitude of my room, and would lay in the silence for hours reading books I had already read, over and over again. They stopped sending me to my room for a punishment and just spanked me instead or took my music away. I avoided this at all costs.

I was allowed to watch one TV show a week when I was very small and we still lived in Virginia. I always chose The Carol Burnett Show or I Love Lucy. Never both. Only one. Then when we moved to Maryland, I was allowed to watch a bit more television. One of the shows I quickly became enamored with was I Dream of Jeannie.

From first grade on I was placed in accelerated reading and writing. It was all I wanted to do aside from making music or riding my bike. I couldn't multiply or divide to save my life (still don't do a good job at it) and many nights found me sobbing at the dining room table over simple mathematical problems. I had tutoring but it never got much better that that, even in high school and college.  I am still at a basic math level. I know enough to be able to figure out what a tip should be at a restaurant, or what percentage I'm getting off of a new dress at Ross. That's all I need to survive, right?

When I was in second grade, I watched I Dream of Jeannie, after school each day. By that year, the show was in syndication and they were showing reruns. Each day when the show was over, I would re-write the script.

I was convinced I could do it better. 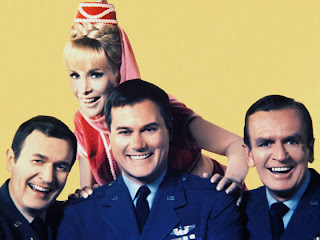 Major Healey's character could make a different choice in this situation...
Major Nelson needed a more compassionate voice in this scene...
Jeannie could be more assertive with all of them, and the the outcome would be different.

Every day I would do these re-writes.
Then I would come to school with the scripts.
And I'd talk to other kids in my class and say, "Let me show you what I'm working on. This is soooo amazing..."  (Yeah, even back then in second grade I was saying everything was amazzzzingggg. The only difference was, instead of being the incredibly cool person I am now saying all this, imagine me as an awkward little pentecostal girl wearing culottes and two pony tails on either side of my head.)


Some of my classmates would listen.
Others would look at me like I was a martian.

I didn't care.
I just loved writing.
The thought of making changes and sharing with others was a passion.

Excitedly, I'd say to my classmates, "Just imagine if the show went in this direction how amazing it would be! I believe this could change everything for the better!!!"

One day Mrs. Mulkey said if I kept this up she would send me to guidance.
I wish she would have!
Better yet I used to pray she would just send me to Mr. Harris.
Mr. Harris was our librarian.
Why couldn't I just stay all day with Mr. Harris?

Isn't it funny that kid can be placed in accelerated reading and writing and then basically be punished for actually...DOING IT?

As a certified career coach, I often ask people what they loved to do when they were eight years old. They think back and name things they enjoyed doing then, and not surprisingly it's not far from what they crave doing now. And I always ask, "Why can't you? What's stopping you?"

There are four things I still do, every single day: reading, writing, making music and riding my bike. And three of those four things, I actually get paid to do.  But whatever, Mrs. Mulkey!! 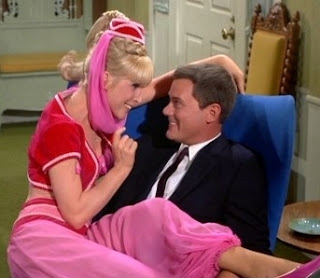 So Mrs. Mulkey went postal during recess. All the kids were on the playground at Chesapeake Terrace Elementary School in Baltimore, Maryland, swinging on the monkey bars and stuff. But not me. I was out there amongst them, waving my script around. "My latest Jeannie script is ready!" I declared with delight. "You're going to loooooove the new ending from last night's show!"

"Deanna Doss!" I heard her shrill voice call out. I can still see her short and stout figure, waddling over to where we were. I don't even think she heard me, she just saw me waving my papers and gathering kids around me.  Surprisingly, I could always get people to listen.

She broke up the crowd.

"Over here! Now!" she motioned sternly.

With one fell swoop she grabbed the script out of my hand and said,"No more! I'm sick of this Jeannie business. Nobody cares! Nobody wants to read your scripts!  Never mind that they are all in a circle around me listening, but whatever. If I see this one more time we're having a parent conference and you're going to stay in the principal's office until you stop talking about this. Have I made myself clear?"

I was devastated most that she confiscated my script.
It was brilliant.  Prolific, I tell you.
Now I would have to rewrite the darn thing.
All that work, down the drain.

I didn't stopped re-writing Jeannie scripts.
I kept writing them all year.
I just got quiet about them.
I wrote them for me.

Re-writing television scripts isn't my priority today.
But writing things I feel passionate about is still my focus.


And you know what?
We don't have to listen.

Martin Luther once said, "If you want to change the world, pick up your pen."

I did, and I still am, and nobody including Mrs. Mulkey is ever going to stop me.
Don't let them stop you, either.