March 17, 2013
So I've been away most of this weekend, actually since Thursday. I was in Ocala, FL to speak at the Freedom Conference for my dear friend, Pastor Jan McIntyre - co-pastor at Marion Oaks Assembly of God. This is her, below. Doesn't she have the most fabulous hair? You can spot her in a crowd anywhere. Yes, that's her natural color. 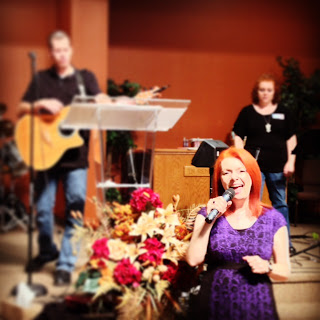 I sneaked this photo while she was praying on Saturday. We had a great time together over the weekend. The conference was fantastic and we even went shopping together. She introduced me to her favorite store -- Kohls. Yes, imagine that. I'm a shopper and we have Kohl's in Tampa, I just never went.  My sister Shari is always telling me about Kohl's. It's her favorite place, too. Jan gets the most amazing deals and she found these shoes for me, which I wore to preach in Saturday as well as to church this morning. 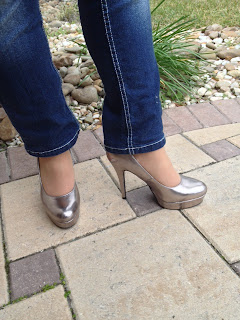 They were originally $70 -- marked down to $10!!  I love them. So, we shared about this fabulous find on Saturday with the women in the audience. And at the close of the conference a lady came up to me and handed me an envelope. Inside was $10 and she said, "I wanted to pay for your shoes. Not only to give you a pair of shoes as a gift from your trip to Ocala, but so that every single time you wear those shoes, you will think of me, and pray for me." I thought that was so sweet. I wore them this morning, thought of her and prayed for her. If any of you want to send me shoes, size 9 and 1/2 with your name attached, I'll be glad to add you to my prayer list. But seriously, isn't that sweet? (Both for her and for me!)

So this morning I was walking across the church  parking lot and there came a full grown adult man skateboarding in the parking lot. (I'm not sharing his name -- I actually think the world of him...just sharing this in fun!) He lost control of the skateboard and it went across the parking lot and slammed right into my feet. He came running over to apologize and said, "Pastor Deanna, I'm sooooo sorry! Have I hurt your ankle?" I said, "Well, I'm not worried about my ankle, I'm just concerned about my shoes." Everyone laughed, including his newphew who said, "Leave it to Pastor Deanna to be more concerned about her shoe than her ankle!" Ha ha ha! 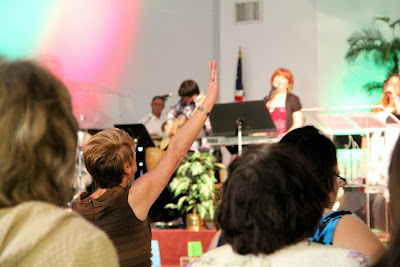 This morning in church was a circus. Just keepin' it real. Larry preached this morning (which was good - that wasn't the circus part) and I led worship (that was the circus part). If you've never been to Celebration Church, I should mention first of all that we have an amazing team of very gifted band members and vocalists. Many people are shocked (in a good way) when they walk in the doors and see the level of talent that is there. God has so blessed us!  But every now and again we have an odd day. Today was oooofffffff.    I kind of lost all sense and sensibility after a series of unfortunate events.

First some players and vocalists did not show and I had to figure out  how to make things work for the worship set. We never got to rehearse all of this morning's set, with working out various bugs. Speaking of bugs, the sound system was full of them today. Squealin' and poppin'. And, we were learning new material on top of that. So, in the midst of service we were taking communion and the team was in the middle of doing "O The Blood" (Gateway Worship) and someone tripped and pulled out the cord to the Korg keyboard that I lead from. Needless to say I was panicked about how to keep things on track but I somehow continued to direct the rest of the band, choir and frontline while the keyboard was plugged back in and restarted, which took about a minute and a half total. That was kind of the last straw for me. I just went loopy after communion was over...


The rest of the team was finished after communion (I told them earlier that I'd play the offertory by myself since, with all the other fiasco, we never had time to rehearse the special music number this morning.) I went to the grand piano because it can't be unplugged,  and decided to play a special instrumental medley just for the occasion. I played Kelly Clarkson's "What Doesn't Kill You Makes You Stronger" followed by "I Look to You" by Whitney Houston, followed by "Superwoman" by Alicia Keys. Yes. I. Am. Serious.

Everyone was clueless. I think they were still in shock from the earlier fiasco. I have never played any of these songs before, but those who know me know that if a song is in my head, it comes out my fingers as if I've been playing it all my life. If I wasn't a pastor I could be making a decent living in a piano bar.

When the time for altar call came I played, "Kiss Today Goodbye" (What I Did For Love) from A Chorus Line. I have played that song before, but the last time was 1984 when I was a senior in high school. I played it for a show back then, but today's rendition was better.  I think the arrangement has aged well. Again, it seemed no one was the wiser. I think they were still in shock, or it was a heck of a weekend and they were tired.

For those who think this is sacrilegious and impedes the spirit of God from moving, just know that we actually had people who received salvation today. Apparently God can move  even when pastors do non-sensical things.

I have to crack myself up at times rather than let things crack me. I can laugh or cry. This kind of  humor is often my coping mechanism. It works. Twenty five years in ministry and I'm still here. Although I'm not "all there".  :)

And I admit it. That's the difference between myself and others. I admit I'm crazy.