God Spoke to Me Through a Rock Yesterday (Seriously!)


Well, I do praise God, but a rock STILL spoke to me.

I worked in the yard all day yesterday.  Pruning a wax myrtle. Treating a diseased tangerine tree. Weeding the yard and all the beds. Yes, it was exhausting.  And I'm still not done.

The yard has been in need of major work. I've been expecting letters from the HOA, and maybe a fine, which is possible in our neighborhood. But with pastoring, coaching, and my travel/speaking schedule, it's been hard for me to get out there and get it all done. I long to get back to the "glory days" when my yard was actually awarded "yard of the month" in my subdivision. (I knew I'd need the photo to prove it later for people who see it when it's a mess and doubt the magnificence of what once was.) 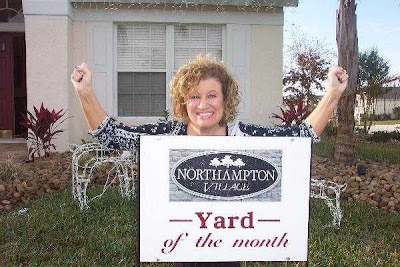 Listen people, this award was major. There are a ton of old farts in my neighborhood that have NOTHING to do but work on their yards. And then there's me. A younger fart with a bunch of jobs, a needy husband, 3 kids, and 2 bulldogs.

Back then Savanna said, "Mom, you will never win over all these old people who have nothing to do but work in the yard all day."

Well, that was it right there.
Just tell me I can't do something and I'm gonna do it!

Once I did it, the luster of going after it again was sort of lost...especially since I was overwhelmed with the rest of life and it would kinda be anticlimactic to win again. Besides that, they don't even give you the sign anymore. They just announce it in the community newsletter and I'm thinking nobody besides me and maybe two or three other people read it anyway.

When working in the yard I normally listen to music or podcasts. But lately I've just worked in silence. There's a challenging situation I've been going through and there have been times recently where I don't listen to anything but silence, so I can hear God more.  There's something special (organic?) about working in the dirt, and talking with Him.

Yesterday I was on my knees in the side bed, weeding amongst the river rocks. We had them delivered by a landscaper eight years ago. It's been that long since the rocks were delivered to our home and needless to say they have been exposted to eight years of rainy season in Florida which is basically a modified monsoon on some days.

I was talking to the Jesus. Just telling Him what was in my heart and how I am so grateful He's ever present to help me in what I'm going through.

I picked up a rock to weed around it, and noticed there was a message on it.  Not only a message, but one written in red! 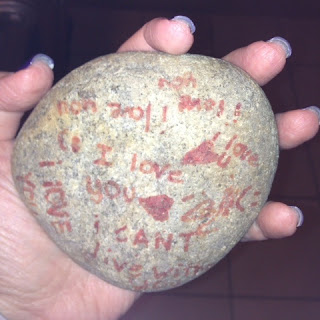 I don't know how this rock with a message got in the side bed of my yard.

Maybe the landscaper's kid was walking around with a sharpie eight years ago, writing on the piles of rocks while he said, "Hey! Quit writing on the rocks! I've told you to stop doing that...people don't want a kid's writing on their rocks they are paying an arm and a leg for..."

Maybe a kid came into my yard when I was unaware and wrote on a rock.

Maybe one of the plethora of people we've had over for gatherings at our house wrote on the rock.

However it got there, I'm choosing to believe it's a message for me, from the One who loves me most.

The rock is not in the yard anymore. It's sitting on my dresser so when I wake up everyday I can be reminded.

Jesus loves me. This I know. For a rock in my yard, told me so.