3 Keys to Writing a Blog Post That Moves People 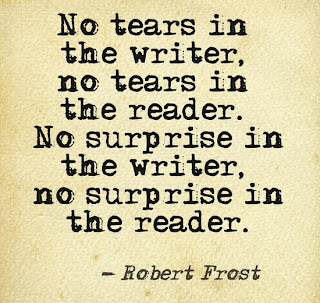 A lot of people ask me about writing. I don't pretend to be an expert but every now and again I'll throw out a post about this for those who are interested in writing. Today I'm going to share three things that I believe are important in creating a post that moves people.

Do It When You Feel It

Don't wait until you completely process things to write about them. In general, I'm a believer in writing things when you feel them, perhaps not to share right then, but definitely to keep for later. Otherwise the moment is lost and you don't have the full impact of all of your senses in creating exactly the atmosphere you desire through your words.

I have a small book in my purse that I can job things down when I'm out and about so I don't forget, or I take notes on my phone if I am away from my computer. Strike while the iron's hot!

Do It Even When It's Painful

Some people start writing, feel pain, stop and put the piece away for later. Not me. I write a lot of times while crying. In fact if I'm crying it's usually an indication that it's going to be a post that will affect  more people in the same way. I try not to stop or dumb the post down by repressing my emotions. If I want to convey that I wanted to die (literally) I come right out and say that I wanted to die. I don't say, "I had considered what it might be like to not be present." Go to the hard places. Go where people are surprised that you're taking them. Let the reader inside your head. Chances are, you're going to get feedback that somebody thinks you're sharing the same brain at times. Most people have no idea that they really aren't alone with some of the thing they do that they think are crazy.

Do It When it's Risky

There so much vanilla writing out there. It doesn't move people let alone shake them. Pick a side. Stay there. Take a stand. Be passionate and don't hold back.

Prepare to have a few enemies. Anybody who's ever done anything significant has some.

I've been blogging (publicly) since 2006. I've been stalked, received more than my share of hate mail, and even had one reader say it was going to be "people like me that one day get Hillary Clinton elected president!!" (They didn't mean it in a positive fashion. They said it as if they were talking about something as horrible as Hershey Kisses becoming extinct.)

If you're going to write about worthwhile topics, somebody's panties are going to get in a bunch.