My cousin Henry, who lives in Tacoma, Washington, came to see us on Friday. We spent time talking for hours, and eating Cuban food and ice cream and having a most wonderful time. I only wish it could have been longer. 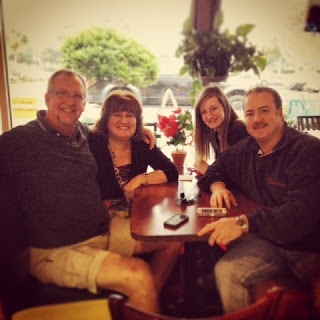 After seeing Henry off to enjoy the rest of his vacation I had intended on preparing the house for my sister Shari to come from North Carolina. I had six hours or so before bedtime to whip the house in shape. However, our son Jordan became very ill. He called and asked if Larry and I could meet him at the emergency room of the same hospital our son Dustin works at.

Jordan has been sick for six days and went to the doctor earlier in the week but nothing they gave him helped. Now in addition to the constant nausea, and pain, he was blacking out and having spasms. We met him there where they began to undergo a battery of tests... 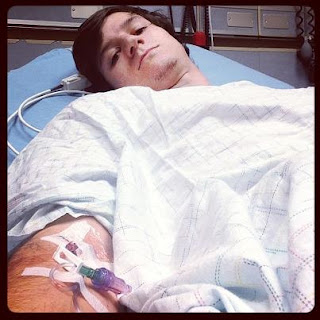 He had it all...urine, blood work, ultrasound, EKG, CAT scan, chest x-rays, you name it, he had it. In the end the diagnosed him with an aggressive virus that had attacked his body. They gave him four medications in the IV, plus 2 bags of fluid and a shot in his leg that took away the spasms. About an hour and a half after administering all the drugs, his condition began to turn around.  We didn't get home from the hospital til' 6 AM the next morning. But...

The  coolest things happened while we were there.

There was a young couple, Brad and Justina, in the waiting room for many hours and I began talking with them. After sharing a while, I gave them one of my little cards I created to give people that contain encouraging words as well as my contact info on it and a promise to pray for them. I let them know we are available to help them and asked if we could pray for them right there. They were very receptive. And they were quite amazed that Jordan in the terrible condition he was in, got up and joined us and came over and laid hands on Brad to pray for him! Here Jordan was dizzy and faint and having to be held up himself, yet he was reaching out with us to minister to Brad! The five of us gathered in a circle in the ER and began to pray for Brad. At the end there were hugs and Brad had tears in his eyes and said, "Justina, we now have three friends in Tampa we didn't have before..."

We discovered they are local students and I asked if by chance they knew a young man named Matt Liller who leads the Christian (Chi-Alpha) group at USF. He also plays bass at our church and is one of our college leaders. They were absolutely amazed that we know Matt Liller!! Their eyes lit up as they told us, he is a good friend who actually used to be Brad's roommate! And, he has been reaching out to them for TWO YEARS, sharing with them about the Lord!!  (I know, amazing, right?!)  They said, "Matt has actually been talking to us about all of this for two years...and we know this is not an accident that we met you tonight and all this happened. God must be trying to get our attention..."

We invited them to Celebration, and they were quite responsive.We were just overwhelmed by the goodness of God right there in the ER and how he brought us together. I told Jordan, "You know honey, I really believe Brad and Justina's lives are changed, and one day you will see all this was worth it..."

Larry and I were also amazed at what we encountered with the hospital staff. Our son Dustin is the Patient Flow Coordinator (basically the coordinator of the transport department) in addition to being youth pastor at the church.  Although he was not working last night, we were able to see Dustin's impact at the hospital. When the transporters would come to take Jordan to a test, I insisted Larry and I accompany him. (I am a big believer that when your family member is in the hospital you have to be an advocate. The patient often can't think for themselves or speak up especially if they are in a lot of pain. When my kids or Larry have been in the hospital, I don't leave them, ever - unless it's a test where I'm prohibited to go in the room.)  What delightful reactions we received!

When we got to ultrasound, the techs said, "Hmmm...Jordan Shrodes...any relation to Dustin?" We affirmed that he is his older brother. The technician said, "Oh my gosh, I don't even know you two but can I just say, you are totally amazing parents?!" We just laughed and asked why.  She said, "Your son is so incredible,  I know you had to do something right." Then she went on and on about him, as did other staff members we met. On and on they spoke of his amazingness. (I know amazingness isn't a word, but I'm using it.)

Of course we pointed out, "yes, and this is his amazing younger brother...and his amazing little sister is at home with him." :)

We finished up at the hospital at 6 AM and brought Jordan home with three more prescriptions, and crashed for a few hours before we had to pick my sister Shari up from the airport.

Nothing I wanted to get done at the house was done, due to having to go to the hospital. However, I was focused on the joy of seeing my sister and quickly got over it. She loves me even though I never vacuumed or scrubbed the floors and a lot of other stuff. At least I had her bed ready and two clean towels for her. The rest is the icing on the cake.

I couldn't have been more excited! Exhausted but excited! We picked her up and headed out to get Cuban sandwiches.   We've been counting the days for months and months. We ate our yummy sandwiches...we laughed, we cried, we hugged repeatedly. Came home and wrapped up in some blankies beside the Christmas tree (which I haven't had time to take down) and talked for a few hours til' we were ready to fall asleep.