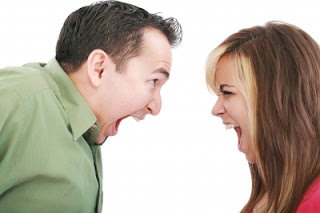 Larry and I noticed something a long time ago in our relationship. Rarely do we ever argue about issues that involve only the two of us. Most often, we're upset about someone else's issues that touch our lives in some way. The discussion of those problems has the potential to bring us to an impasse. Translation: a knock down drag out argument, minus violence.

Larry calls everything we fight about aside  from things that exclusively concern the two of us, "rickle rackle." It's his own special label for it.


Rickle rackle:
an argument that would be non-existent if it was required to only be about us with no other person or thing involved.

Reviewing everything we've ever argued about, we realized that's pretty much...everything.

For us, this was an amazing revelation. When we finally realized that what we fought about had almost nothing to do with the two of us, we were able to see that we were allowing outside forces to pull us apart.

So many times Larry has looked at me and said, "you know babe, this is crazy. It's not even about US. Our relationship is more important than this rickle rackle, so let's let this go, for our sake..."

Identify rickle rackle.
Focus on what's important.
Refuse to let anyone or anything destroy us.

For some reason I felt like somebody out there just needed to hear this today, so for whatever it's worth...there it is.