"It was difficult to keep listening to a liar all morning..."


My husband said this to the pastor we worked with at the time, after the kickoff of the church's weekend marriage conference. It's important to note, the pastor wasn't the speaker!  Our pastor we worked with at the time had brought a ministry couple in to speak for the weekend and after the first session, asked the staff members our impressions of how things were going.

My husband formed a strong opinion almost immediately after the guest minister started speaking because he said, "I just want you all to know, we've got such a strong marriage, my wife and I haven't had even one argument in over twenty years!"

My husband leaned over to me and whispered, "Either he's a bold faced liar, or the marriage is completely dead and they haven't had a real conversation for 20 years..."

Larry's suspicions were right. I'm not sure if the guy was a liar or they simply didn't speak, but we were not shocked when we heard that this ministry couple divorced years later.

Here's the truth: in any successful relationship, there are areas where you don't agree. My husband and I always say, "If both of us were the same, one of us would be unnecessary!"

We are both very strong personalities, are not always in agreement, not just on little piddly things but sometimes matters of greater importance. So, how do we do it? How do we not only peacefully co-exist in a marriage where we don't always agree, but keep it hot in all the right ways even when we don't agree?

This is not a complete list, but today I'm sharing 3 ways to keep a marriage hot even in time of disagreement:

Arguments need to have boundaries. No verbal abuse, name calling, or disrespect. It's important to note, this needs to be two sided. The bible calls for mutual respect among marriage partners - not respect one way. Larry and I have had a lot of strong disagreements but one line we never cross is that of verbal abuse or name calling. We have disrespected each other more than a time or two and needed to ask forgiveness.

I've heard a lot of bad advice in my life. One of them, often thrown around especially in Christiandom is, "you need to come into agreement with your spouse." I understand the spirit of this, but anything taken to an extreme will hurt a relationship.  Ecclesiastes 7:18 says, "Pay attention to these instructions, for anyone who fears God will avoid both extremes." Two people are never going to agree on absolutely everything. There are a few key issues that, it is absolutely imperative to work toward coming into agreement with your spouse. But I have found those issues to be few and far between, in a healthy relationship.

Just because we don't agree means we have to distance ourselves. There are times I get frustrated that Larry and I don't agree on something. But, I know if I allow a physical or emotional distance on my part, I am cutting off an opportunity for conversation to take place to create possibility for change in either one of us. It's important to stay close no matter what issues are on the table. This creates an environment to have positive and powerful discussion and move your relationship, and the issues, forward.

The Bible describes marriage as a mystery and I'm convinced just one reason is because true marriage is the blending of two without ever losing yourself. It's not about becoming a clone of your spouse.

Sometimes the perfect combination is...the opposite. 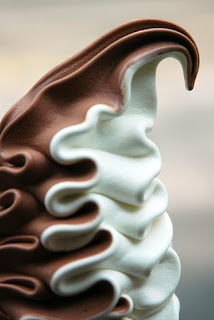