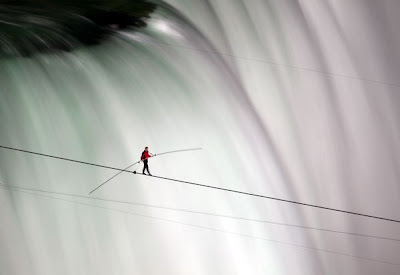 Wishy-washiness is so unattractive.

Ever met somebody who just fits in wherever they are because they change to accommodate their surroundings?  I'm not referring to those who are team players or possess good interpersonal skills.  It's about a lack of backbone and integrity. It's about changing your attitudes and language and posturing simply because of who you're with -- usually for selfish reasons.  It's about playing political games and selling out for personal gain. (I truly believe there is more of this in ministry than in world politics.)

Some people are well liked, but they die never accomplishing anything, except for having less enemies than those who change the world.


I'd personally rather deal with South Korea than Switzerland because at least I know what they stand for.

I've written a manifesto for those who hate the middle and love the edge. Enjoy.

Stand up.
Stand out.
Stop blending in.
Quit melting into your environment.
Let go of the fear of being different.
Move out of the middle and live on the edge.

Pick a side.
Be loyal to it.
Go to the wall for what you believe in.
Declare war on milquetoast living.
Kick some devil-butt.
Take being loved by all off of your list of life goals.
Hate the middle and love the edge.
Forget about never upsetting anyone's apple cart and realize it's a given for world changers.
Say the difficult things to people's face, not behind their back.

Speak the hard things nobody else has the guts to say, but everybody wishes somebody would say.
Realize that no conversation is too hard to have, after all that God has done for you and equipped you to do.
Refuse timidity.
Be willing to lose everything for what you believe in.

Be the person who speaks for those who are too weak to speak for themselves.
Love God. Hate Evil. Do something about it.