"You must do the thing you think you cannot do!"
~ Eleanor Roosevelt 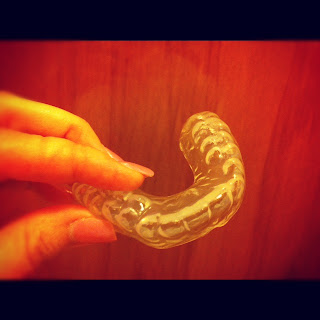 This was my urgent plea last Friday when my dentist put a night guard in my mouth for the first time.

I thought I was going to throw up!

Gag! Yuk! I hated it.  I seriously thought I could not stand it for one more second.

I drove home thinking, “I don’t want to keep this thing in for a second let alone eight hours a night.

They advised me to wear it during the day for a while to get used to it. I listened to their instructions and started wearing it a few seconds at a time, then a few minutes, and kept increasing the time. I also listened to the wisdom of friends who also wear a night guard and told me to press on, that I would get used to it.

Well, I’ve worn the night guard every night for the past three nights and amazingly I’m at the point where I can’t imagine what I ever did without it! It helps tremendously.  I realized after I just uploaded the photo up top that I took it right after flossing and the lines are still imbedded in my fingers from the floss making my fingers look much older than they are. (Hee hee!)

There are many things we can’t imagine ourselves doing. Or becoming used to. Or getting through. But as we press forward -- the Lord helps us.

It helped to not think about how I was going to handle the weeks ahead, or the months ahead, or the years ahead. I needed to take it second by second, moment by moment, day by day -- just like I did with the night guard.

Whether it’s wearing a night guard or moving beyond misfortune and tragedy...we can.

I’m praying for you. (Really, I am. I pray for my readers all the time.)