Why Who You Work With Matters 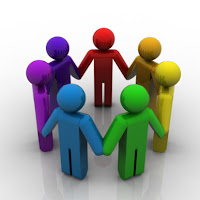 I've weathered staff relationships that were so out of sync it took more than prayer to manage the working relationship.  I needed a prescription from the doctor to deal with them until they resigned or were fired.

Who you work with is just as important as what you're working on.

If you aren't in unity with who you work with, it wears on you. Horribly. It affects your work so much, it can become unrecognizable. Ineffective. Bland.


Being out of alignment with those you work with causes you to lose your creative edge like nothing else. I'm not saying you have to think alike on everything, or be carbon copies of one another. That's really boring in itself to think about.

You know in your heart of hearts exactly what I'm talking about. There are times you just gel with people in a working relationship or you don't.

Money doesn't always define what brings happiness in a work situation. There are times I've been far happier making much less money and working with who I really want to work with. Lots of my friends, from minimum wage workers to those making six figures or more tell me this.

Get the WHO right and the WHAT becomes much more fulfilling ~ you hit your sweet spot much quicker and can stay in the zone of success.