What should happen to Dottie Sandusky? 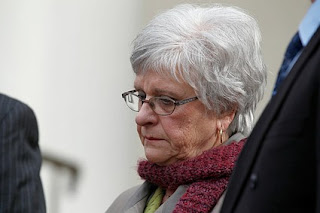 Although twelve people in Bellfonte, Pennsylvania know how they feel about sexual abuse, many other people still haven’t figured it out yet.


Watching the footage on the news last night, after a jury convicted Jerry Sandusky of 45 out of 48 charges of sexual abuse, I had to restrain myself from throwing something at the TV when his wife Dottie came out of the courthouse. The cameras focused on her as some friends consoled and embraced her.

Quite frankly, it makes me sick.

How many little boys’ would have been spared had Dottie Sandusky simply walked out of la-la land down to the basement?

How many young adult men would not be in need of therapy had she made the decision to refuse to look the other way?

While Dottie Sandusky busied herself doing God knows what in other areas of the house, little boys were living out the most horrifying experiences of their lives.

It is preposterous for anyone to believe that she didn't know something was wrong. Women by nature are very intuitive. Either she didn't want to know, or she's mentally challenged. I haven't heard any reports that she is learning disabled.

So, women -- I ask you,  if your husband started bringing young boys home literally hundreds of times and going into the basement with them each time at night, would you not think something was amiss and investigate?  If Dottie Sandusky saw nothing it was because she chose to see nothing. She made a decision to stay upstairs with her head in the proverbial sand.  She kept the illusion of her perfect marriage and Christian family intact, and held on to her house and bank account...at least temporarily.

Countless little boys paid the price for her self-preservation.  I use the word countless simply because at this point, that’s reality. How many other young men have yet to come forward?

Do we really want to do whatever it takes to stop sexual abusers?   We speak about how horrendous sexual abuse is and what should happen to offenders. Everything comes up from vigilante justice to torture to prison to the death penalty.  It’s easy for most to spout off these things until somebody they know has been found guilty of sexual abuse. When your loved one is exposed, it’s easy to soften…to think the punishment a little too severe.

Mrs. Sandusky was observed winking at her husband in the courtroom while she was testifying on the stand. Instead of admitting her colossal failure to investigate her husband's bizarre behavior she took the opportunity instead to call the accusers "clingy" and "conniving."

Talk about a double victimization.


Many women like Dottie Sandusky have a greater in interest in self-preservation than doing what is right for their children.  When they reap the consequence of that choice, why do so many sympathize? We still don’t have our minds made up about abuse in America, or we would side with the victim every time.

I'm already seeing some status updates and comments on Facebook from some bleeding heart Christians, praying for Jerry Sandusky's soul, that God would spare him and help him.  Christians often ask the question: “What would Jesus would do?”

Jesus clearly told everybody to never hinder the children. (Hindering would include rape, by the way.)

Jesus was really clear on what happens to anybody who harms children. It's serious business. He said the Kingdom of Heaven belongs to the children. He said if anyone leads the children astray, it would be better a millstone hung around their neck and that they be thrown into the sea. It doesn't sound like Jesus is just making sure they are not within 1,200 feet of a school or sending them to a program.  Jesus extends some rather tough love on people who harm kids. People  are often wishy-washy about what should happen to people who hurt kids, but Jesus isn’t confused.

Thankfully 12 jurors got it right last night. We cannot take the chance that one of these people might be able to be rehabilitated. Might is not good enough when it comes to our kids welfare. Even if someone could be rehabilitated, that doesn't mean they should not have to be removed from society for their crime.  Thank you, Bellfonte jurors, for doing the right thing.

A personal friend who lives in State College says, "Our city has been through so much already...once this trial is over it's time to put it to rest now and heal."

I don't think so. Not quite yet.  There are a few more people to call to account.

Dottie Sandusky is at the top of the list. 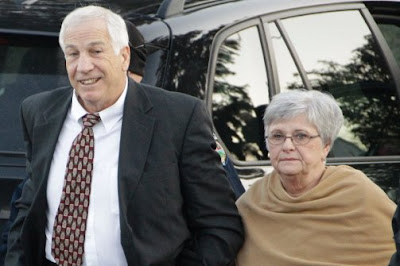 A lot of people are going after Penn State and Mike McQuery, but please, let’s not forget the woman who could have blown the whistle on this whole thing a long time ago and spared a lot of lives but didn’t.

Do wives and mothers just get a free pass when they cover up crimes?  If Dottie Sandusky isn’t called to account as an individual, it appears so.

Some say, “God will set things right some day…”

Oh please. This is jut another excuse.

Why wait for eternity when God has given us the power to set things right, now?

Still others will say, "She's lost her husband who will go to prison for the rest of his life...is that not punishment enough? She must be in such pain."  Last time I checked it wasn't punishment to have a monster removed from your midst. But I know, one person's monster is another person's husband...or something like that...

Wives and mothers, I implore you to realize that a marriage is not worth covering for a monster. If your husband is abusing kids, you are living a sham, not a marriage. If your live-in boyfriend is abusing kids, why on earth are you still with him? The time to dump him and report him is NOW.  Whatever material possessions you lose are small in comparison to what the child is losing and can never get back. Don’t wait another second.

Fear of what we might lose personally in stopping crimes against children needs to stop.

It’s time to move beyond the lousy excuses of self-preservation and fear and do the right thing.