Hunger Games Premiere Worth the Wait 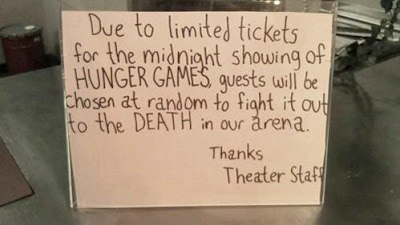 Why would people go to a movie hours ahead of time and sit and wait in a dark movie theater? Those who have never read The Hunger Games books may wonder about this. In fact, I know people are feeling that way. I've already received e-mail from a friend this morning asking, "what's the deal with this movie? I saw what you wrote about it last night on Facebook. Explain it to me..." (They were not criticizing, simply wanting information to see if it was something they should read or see with their kids.)

After working very late every night this week trying to catch up on work, I topped off my exhaustion by fulfilling a promise to go to The Hunger Games premiere with my family. It was a promise I was excited to keep. Although really tired, I was never tempted doze off during the movie. Having devoured the books after my son nagged me into reading them, I was counting the days for this moment!

I thought we would leave at 11 pm to go over to the theater which was one all the way across town, but I was mistaken. Dustin informed me we would have to leave several hours earlier to get a decent seat. Although we purchased our tickets weeks ago, I soon found out that good seats were another issue altogether. Why were we at a theater all the way across town? Because the two closest to us were already completely sold out of tickets many weeks ago!

We left at 9 pm and by the time we got to our theater some of the them were already filled. The one we were originally assigned to be in was filled so we were sent to another one -- yes, three hours early!

Upon entering the room we were pleased to get seats in the row we normally like to sit in at movies, and we were surrounded by a plethora of middle schoolers who were absolutely bouncing off the walls. I'm only slightly exaggerating. Some of them were shouting, singing, dancing, laughing, even playing charades...anything to pass the time for three hours. I caught up with mail on my iPhone since I was still behind on things and catching up.

Finally the movie started. I felt my pulse quicken I was so excited, and during various parts of the movie I found myself anxiously gripping the sides of my chair, although I already knew what was coming.

I laughed. I cried. Silently.

The girls behind us weren't so silent. The sobbed aloud during several parts of the movie.  Afterwards, Jordan said, "Mom, those sobbing girls behind me were getting on my nerves sooooooo much."  I explained to him, everybody responds differently.

The theatre full of people burst into applause at the conclusion.

It was worth the wait, for sure.

Most of all the family time = priceless.