How to shape your kids' values

February 07, 2012
Have you ever worried about whether your children will share your values when they are adults? It's a common concern among parents. There are several ways to shape your children's values, but in this post today I'm going to share the number one way.

The first and the best way to shape your kids' values is not to share them, but to live them!

That's right, live your values. Live them all the way. Live them passionately.

An ounce of living is worth more than a pound of speech.


Last night we were coming home from having dinner with pastor-friends when my cell phone rang and it was our oldest son Dustin. He was just getting off work from his job at the hospital where he serves as a patient flow coordinator, which basically means he oversees transporters and gets people where they need to go in the hospital.

He said, "Mom, I have to tell you about this conversation I just had. It's going to blow your mind!

Things were so busy tonight in the hospital I had to get on the floor and help the transporters. So, I was taking this patient to another area of the hospital and he started asking me all kinds of questions about myself -- how long I've worked at the hospital, and if I go to school anywhere. 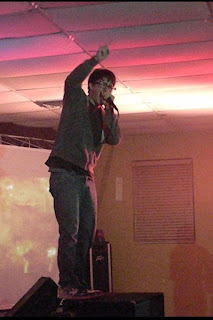 I told him that I've been  a student at the school of ministry for the past two years and serve in the church working with the youth and fine arts and am preparing to get my minister's license.  And he said, 'Oh...that's very interesting!  You're going to be a minister. Well, let me tell you what's wrong with the church today...'

So I kinda laughed at his response and said, 'Ooookay...I'm ready. Go ahead and tell me what's wrong with the church today.' And he said, 'It's liberal!' and I said, 'Liberal? You think so? Well, I consider myself a pretty conservative guy. I'm not really sure what you mean by liberal. Why don't you explain to me exactly what you mean by that.'

He answered by saying, 'well, for starters...women!' I had no idea what he meant by that so I said, 'Women? In what way are women what's wrong with the church?'  He explained, 'Well, today they let them have whatever job they want! And if they have something to say, they actually let them say it! And if they want to get up and preach in the pulpit...they let them! It's unreal what they let these women do!!! It's just wrecking the church.'

So I said to him, 'Wow. Seriously? Wow. Um, do you really believe that's what's wrong with the church today?' and he nodded his head and said, 'yes, yes... I do believe that.'

So I said to him, 'Sir, I'm in charge of taking you where you need to be tonight in the hospital. And certainly I'm concerned about your health and I'm praying for that. But I want you to know that even more than praying for your health, I'm praying for you as a person.  God bless you, sir.'  And then I dropped him off at his room and left."


*****
I haven't done everything right as a parent, by far. Lots of people including me could write a blog series on all of my mistakes. But one of my goals as a mother has been to raise my children to believe that women serving in leadership is perfectly normal, not to mention God's design. My strategy has never been to sit down and talk to them about all the chauvinists I've encountered, or share stories about glass ceilings I've bumped my head on. I've never believed that would shape them.

Think about it...how many parents have told their kids stories about walking to school everyday in the snow, uphill, both ways? Has it really affected the kids values and caused them to be more grateful? No, they mostly just poke fun at their parents for giving command performances of these speeches ad nauseum. Stories can be powerful at times, but example much more so.

Example isn't everything, it's the ONLY thing!

We can't rely on what we say in shaping our kids' values, because in reality things are more caught than taught.

My goal has always been to be the best leader I could possibly be, beginning with my role in the home first. That's the primary leadership position any of us have -- in our home, leading ourselves first, then extending out to others around us.  Our children watch us as we do all of this - in the home and outside of it. They judge for themselves whether something works, or not. I want them to see firsthand how valuable the contribution of a Godly female leader is. I want it to be so powerful that the opposite would almost be unthinkable. I want imagining a world without women taking their place in the home, in the Kingdom, in the marketplace to be an utter tragedy to them.

Dustin  doesn't just believe that prejudiced people are old school in their thinking -- he believes they need a spiritual transformation -- a heart change. That's why he never argued back with the man and simply said he'd pray for him. We both realize, only God can change such a deceived and hardened heart. Debating will never do it.

But still, I wonder if he dropped him off in the psychiatric ward after he told him he was praying for him...