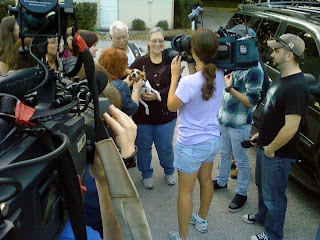 Last night Tank's reunion was shown on Fox News 13 and CBS 10 News. As soon as links go up online I will post them here and on my facebook page. I cried all over again last night watching the CBS interview. They shared that last month the family put Tank's Christmas stocking up, hoping that he'd return even though it had been 10 months.

The thought occurred to me that Barbara Lynn and her family may not even have realized how precious Tank was until they lost him for 10 months. A lot of things are that way in life. Like one of my mentors, June Coker says, "They don't miss the water til' the well runs dry."

Beth, the reporter from CBS, spoke to my husband off to the side last night and said, "Pastor, you have awesome people here!"  Larry told her that we know just how blessed we are and are so thankful.

Once again I am reminded of just how amazing the people who surround us are. I can't even describe the feeling that I had when Donna pulled up in her car with Tank. As they rounded the corner into the parking lot, Tank had his paws on the dashboard, wide eyed and expectant, tail wagging as the people clapped and cheered his arrival. Mike opened the car door and transferred the leash from Donna to Barbara Lynn while Georgia, one of our celebrators, put a little kerchief on Tank that she had specially made for him that has a "map" on it. (So he never gets lost again.) It was just precious. 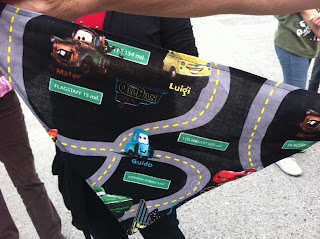 Most everyone including Beth from CBS stayed until it got dark outside. At one point the cameras were already put away in vehicle but Beth said, "we need to get the cameras out again!" because the outpouring of love just continued. Out they came and she began taping again.

Tank got so many hugs, kisses and even notes of love from the children, I lost count. Barbara Lynn got countless invitations to church. Beth gave me her card and said, "whenever there's anything else happening at this church, please give me a call." Dinah, one of our Celebrators said, "Well Beth, we'd be calling you all the time because this is a church of constant miracles!"

I recently heard it said that one must never take your blessings for granted or what you are granted gets taken.

Do you recognize the blessings that you are surrounded with?