Why I'm jealous of missionaries... 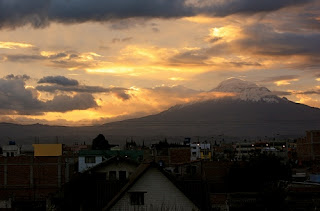 Wrapped in their ponchos they walked.  A few were by themselves, some traveled with many family members, still others in pairs.  The sun was just beginning to set in Riobamba, Ecuador as the Quechua Indians moved forward with determination up the mountain to their destination.

Entering a small block structure they  settled in -- both the people and their animals.  The main building had a small room adjacent to it which served as a pen of sorts.

A single light bulb illuminated the building hanging from a cord in the center with a large cardboard box serving as a pulpit at the front of the room.  Crude, backless benches were the only pieces of furniture in the room with no other tables or items of decor.

No flowers.  No set designs. No banners with cool graphics.  No coffee bars.  No computers or big screens. Not even a box of kleenex was to be found!  Tissues would have been readily put to use if available, with many little children filling the space in the front, seated on the dirt floor, their noses running from the chill of the air.   Nobody seemed to mind the scarcity of material things in the room.

With the meeting about to begin, a man arrived carrying his emaciated wife on his back.  He had journeyed through the village, carefully transporting his most precious cargo. She was probably all of 80 pounds with her sunken face and a scarf wrapped around her head, salt and pepper hair poking out a bit underneath.  Without a miracle, she wouldn't be alive much longer.  He tenderly lowered her to one of the benches and wrapped his arm around her, steadying her where she remained resting in the comfort of the crook of his underarm the rest of the evening.  Desperate for a healing, it was incomprehensible to her not to be there.

A pastor  had come from America that Sunday night.  Prior to service he and his and wife asked the Quechua pastor if many of his church members were expected to be present that evening.  Perplexed, he said, "All of them will be here...why would they not be here?  Our people don't miss."

"Could that possibly be true?" the guest pastors wondered, having never experienced such a thing in their country.

True to the Ecuadorian pastor's word, the church was absolutely packed.  Naively the American pastors thought, "maybe they're here because it's a special night and they knew we were coming."  That theory was soon dispelled by the missionary who leaned over to them during the prayer portion of the service and whispered that the turnout was normal for this church.

After the American pastor's wife sang some songs,  her husband brought a powerful message using an interpreter and the people pressed forward to the altars for a touch from God. They had all come expecting that night, and God's power came down.

Even a dog seemed to love the service, as he came bursting through the pen and ran down the center aisle during the praise time!  Nobody except the guest preacher's wife seemed to take note of this dog. She was enamored by the creature, but it didn't seem to phase the people -- they were so focused on what God was doing.

They stood in worship for a long time, and then sat on the uncomfortable benches, hanging on the preacher's every word.   Valuing the people and the purpose of this gathering place, they invited every person they knew on a regular basis.  This was what they lived for!

It was time to go.  Nobody wanted to leave.  They had been there for about twice as long as people would be in a service in America, but no one seemed to notice the time.  Clocks were another missing element from the facility.  Though they  had been serving as pastors in the United States for over a decade at the time, the visiting ministers had never experienced anything like it.

There were moments during the service when they thought the sky may split open and Jesus would come back right then and there!

The missionary was escorting the visiting pastors out of the building when one of the little girls wrapped in a poncho and wearing mud caked shoes came running over to the guest preacher's wife.  With a  shy smile she presented her with some pink roses saying, "Thank you for coming!  I love you!" The child had no way of knowing that pink roses were the woman's favorite -- that her grandmother had always called her "Rosebud", that she had even given her daughter the middle name "Rose" because of it.

Overwhelmed by the love of this sweet child, the preacher's wife bent down to her eye level and asked, "what's your name?" She wanted to always remember by name the little girl who had been so kind.

The little girl answered that her name was Melanie.

Eyes filling with tears, the preacher's wife embraced her.  Melanie was her name too, at one time.

You see, when she was born this was her legal name, given to her by her birth mother.

It was her name before a couple later adopted her and legally changed her name, to Deanna.

Michele said…
Love it- I do not think I have heard you tell this before
2:42 PM

Russell Faux said…
a virtual standing ovation is in order, "iOvation".
Praise God for missionaries and people like you who compass the globe to go and do what God asks you to.
I will never forget this story.
4:14 PM

Michele, that's the beauty of having me for a friend/pastor...I will never run out of things to share with you ~ there is a surprise around every corner. I've experienced so much. God has been good. Writing is my favorite way to share it.

Terri von Wood said…
Deanna: Tissue warning next time, please!! Absolutely incredible. Love it when God is this specific. It reminds me that He knows each of us specifically and we can go to Him with specific prayer requests because He truly does care for us! Thank you for sharing! Terri
4:34 PM