We still don't know how we feel about sexual abuse 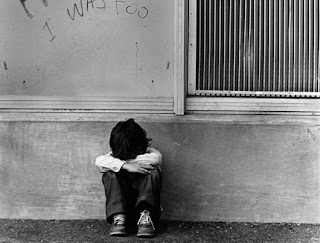 Everyone thinks they know.  Until someone close to us, or a high profile person is accused of doing it, or covering it up.

I have been watching and listening with interest about what's happening with the issues at Penn State.   I knew nothing about this whole scandal until some people were talking about it at church last night.  I quickly observed that people are very divided on the issues.  The controversy appears to be over who bears the responsibility for ensuring that action was taken and justice served.  Although there are a plethora of people who knew about this, Joe Paterno is in the center of the controversy although I'm not sure he belongs there.

Before I speak to anything I try to educate myself.  I came home and read this document.  I will give you a warning before reading it that it's very graphic.  If you are a normal person, this document will grieve you.  The vile contents will absolutely turn your stomach.  With that said, I do recommend that you read it anyway, as there is no other way you will have a full education as to the crimes that were committed unless you do.

After reading the grand jury testimony as well as news reports and having discussion with several people, I have come to the conclusion that anyone who knew anything concerning this abuse who did not personally report it to legal authorities bears some responsibility.  Comparative negligence is a factor, however everyone with knowledge bears some degree.

I have no axe to grind one way or the other regarding Joe Paterno.  I am indifferent to anything regarding football, however one thing I care about extremely is people.  Joe Paterno is being unfairly singled out, however he is in the group that does bear some responsibility because they all knew.  From Paterno to the janitor, they knew!

The first person who bears responsibility is Mike McQueary.  He is the Penn State coach who was the "28 year old graduate student" that witnessed the rape in the shower.  I find it interesting that in the grand jury testimony McQueary is never named, but Paterno is.  McQueary is simply referred to as a "28 year old graduate student".   He is a coach for Penn State!   It is unconscionable that he is actually still coaching and in fact will be coaching this weekend.   Sane people are calling for his removal.

We all bear responsibility for whatever comes to our attention, no matter what official position we hold.  In the document that I referenced earlier, you will see that even a janitor knew what was going on, after walking into the locker room when Sandusky was engaged in oral sex with a young boy.  It upset him so much, he developed health problems over it.  Other employees he shared this knowledge with said that he appeared as if he was going to have a heart attack, because he was so overwhelmed and distraught by what he witnessed.  But for all that, he still didn't do the right thing.  None of them did.  In their grand jury testimony they said that they were afraid for their jobs.

Every single person who knew bears responsibility.  Whether you are a cleaning lady or a college president, if you know about it, you must go to whatever means necessary to stop it, and see that justice is served.

Mike McQueary made a grave mistake.  The appropriate course of action would have been to dial 911, and then put the cell phone down to rescue the boy while he let the 911 operator hear him beating the heck out of Jerry Sandusky.  But there was no rescue, no phone call, no beating the daylights out of this monster.  A coward, McQueary ran away and went home to his father where they discussed what should happen next.  When morning came they called Joe Paterno.

Morning was too late for a 10 year old little boy.

The grand jury report shows that both Sandusky and the boy know that McQueary saw them.  Surely the boy was wondering, "He sees me being raped...why isn't he helping me?"

We can't just pass the buck around blaming position or authority and believe we've done our part.  We've only done our part when a child has been rescued, abuse stopped, and perpetrators held to account.  Then and only then have we "done something".  Who cares about titles or job description?  Human beings with a moral compass DO something to stop evil.

I've had to unfortunately live this few times myself.  As a pastoral staff member years ago serving under another senior pastor, Steffi* one of the teens of the church where I served came forward about a parent abusing her. Although I informed the senior pastor of what was disclosed to me, I didn't simply trust that the pastor would hopefully do the right thing.  I made the call to social services myself to be certain the issue was properly addressed.  After calling the first time to report it, I called back a few weeks later to ensure that all of the appropriate follow up was done.

But it was all worth it for Steffi and for her sister as well, who authorities also found out was experiencing the same abuse!  Although we can't take away what was already done to them, we stopped anything more from happening.  I'd make the same decision again in a heartbeat and sad to say, I have had to make this decision three times over the last 25 years.

We can't just keep passing the buck, hoping someone with higher or different authority does something.  When something of this nature comes to my attention, to your attention, it is incumbent upon us to personally do something about it, and to follow through to make sure.  Assuming is never a positive thing.

Anyone from president to janitor who knew and didn't see this through to justice should face ramifications.

After hearing all the conversation about this the last 24 hours I'm convinced America still doesn't know how it really feels about sexual abuse.

Connie Jo said…
I couldn't agree more. It is very sad that people are divided over this and making it a "football" issue and not an issue that young men were victims. How are they losing sight of this? I am also indifferent to football and PSU however, Joe Paterno may not have been directly involved in the cover up but he knew that a cover up happened and as an educator and coach he was obligated to protect those boys and he failed to so. In my mind he is just as guilty as the ones facing the grand jury.
3:14 PM

Sandy said…
I agree with you about the whole thing. I too had been hearing a lot of noise about this Penn State thing but didn't really know what was going on. Thanks for researching this and putting it out ther.

I heard this the other day and it's pretty close to where we are as a society. "If God doesn't come back soon He will have to resurrect Sodom and Gomorrah and apologize" I don't see Him doing that, I see Him putting his enormous foot down.

I particularly agree with "The appropriate course of action would have been to dial 911, and then put the cell phone down to rescue the boy while he let the 911 operator hear him beating the heck out of Jerry Sandusky. " Girl I was right there with you on that one!
4:45 PM

Russell Faux said…
Well done PD!!!!!
I agree 110%
This whole issue really reveals something about our society doesnt it? How wicked we have become when we can put a football program, money or reputation above the welfare of inncoent children. It's a freakin crying shame!
I beleive things like this will indeed escalate and more and more people will have to choose $ over what's right, good over evil. I am reminded of how the romans and the jewish people of Jesus time were so wicked that they chose Barabas over Jesus. More and more our society calls evil good and good evil.
In this issue there apparently was not one person who would take a stand for these boys irregardless of what the consequences would be for them. WOW.
8:47 PM

Deanna Doss Shrodes said…
Thanks for your feedback, everyone. I so appreciate it especially on this important issue.
9:25 PM

Terri von Wood said…
Deanna, yours is probably the best presentation of all the parameters of this situation. Particularly liked: "The appropriate course of action would have been to dial 911, and then put the cell phone down to rescue the boy while he let the 911 operator hear him beating the heck out of Jerry Sandusky!" Yep!
12:29 AM

Terri von Wood said…
Deanna, yours is probably the best presentation of all the parameters of this situation. Particularly liked: "The appropriate course of action would have been to dial 911, and then put the cell phone down to rescue the boy while he let the 911 operator hear him beating the heck out of Jerry Sandusky!" Yep!
12:30 AM

sorry i kept forgeting to put my name so it kepts coming up Anonymous
11:34 AM

Grace said…
As one who lived in PA until a little over a month ago, let me state that there have been rumors about this for many years in and around PSU. The local news interviewed JoePa when Sandusky left coaching to devote all his time to Second Mile. Paterno stated several times during the interview that he did not believe any of the rumors and shamed the media for feeding the "mill." At that time, he knew.

There is a great lesson for us all, Deanna. Paterno worked so hard at his career, to be known as the oldest coach, coach with the most games, etc. And in one bad decision, he destroyed all he worked for.

I agree with you. There should be a total Fall Cleaning at Penn State.
10:14 PM

Deanna Doss Shrodes said…
Oh my gosh, Grace, that is unreal. Your comment ---- "Paterno stated several times during the interview that he did not believe any of the rumors and shamed the media for feeding the "mill." At that time, he knew..." brings a whole new level of deception to this thing.

Why are they not playing that right now on the air or re-releasing those old news articles to back up what they are saying right now for all these people who feel sorry for "JoePa"? I read yesterday that a few months ago he sold his house to his wife for $1, fearing that this was coming and so everything has been transferred to her name to prevent him from losing it in case he loses a civil case.