I dare you to speak up 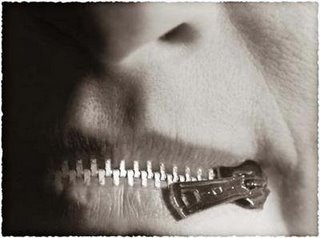 What you have to contribute to the world is important.  We need your thoughts, your voice, your ideas.

Don't ever let anyone talk you into suppression no matter how wise or even anointed they sound.  They may even use spiritual lingo like, "in God's timing you can share what is in your heart, but that time is not now."  Wow.  Since when did God die and leave them in charge of who can express their heart?  Imagine if the world waited twenty more years to hear from Mattie Stepanek.

God didn't create you to suppress you!  The enemy is all about containment and God is all about freedom.  This theme actually runs throughout the whole Bible.


It's both dismaying to me as well as amusing to see people bristle at the unprecedented opportunity that abounds for people to share their thoughts today.  I wrote about this in another blog post recently when I turned on the TV just in time to see a well known speaker at a Christian university blasting young church planters who were blogging and developed an influence on others they deemed inappropriate.  They felt that these students and young pastors should be looking to those in official posts at the University.

Social media has revolutionized the world in that it gives all of us a voice.  Well, let's be clear that God has already given all of us a voice --  but social media, which technically comes from God because nothing ever surprises Him or happens without Him giving someone the idea -- has elevated it to a whole new level.

Somebody people consider a "nobody" can start blogging and if they write consistently and are good at it, people will listen.

2)  People who are already influencers on a great scale (authors, speakers, etc.) and want to be an exclusive voice or at least put their stamp of approval on those who do become a voice.

When these two types of people are uncomfortable they start talking about how only certain people have a voice and try to silence those who aren't in the group they deem to be the blessed ones who get to share.

What's the problem with this?  It's completely unbiblical.

Again, God didn't create you to contain you.  What you think, what you have to share not only matters, but it matters a lot.

Martin Luther once said, "if you want to change the world, pick up your pen."

Plenty of people have.  Previously unknown people.  People some people would love to see stay unknown.  Fortunately they don't get to decide that -- God does.

If Martin Luther were alive today he might say, "If you want to change the world, start a blog."

I beg you, speak up.

There are people who desperately need to hear what you have to say.

Miss Mollie's Musings said…
What a great post to encourage writers/bloggers. I thank you for the "marching orders" I got over the shyness and love blogging. I pray it changes someone's life.
11:11 AM

sandy said…
YAY!! someone said it!

You know it's as silly as telling a musician not to write songs, not to play them and not to record them. It's also saying to an architect, don't make blueprints. Oh and let's not forget all those creative engineer types to not come up with some cooler mobile device because we already have the iPhone and iPad.

Lisa N Alexander said…
PD, thank you for this post. I was asked the question in prayer earlier this year...well who censored you? It wasn't me. Thanks for this confirming word.
3:00 PM

Deanna Doss Shrodes said…
All of you make a HUGE difference in my life and many other people's lives. Please, never allow anyone to squash what God wants to say to the world through YOU.

Unknown said…
Wow. Thanks, Deanna. This is so encouraging to me today. The Lord has been stirring in me over the last few months about being more vocal and deliberate about the passions He's given (giving!) me. It's easy to get intimidated and think 'why should I when there are so many others?' I'm thankful that it's His job to figure that out, it's mine to obey. Thank you for the reminder. I'm so glad I found your blog today, it truly is from the Lord. I'd love if you'd stop by @ http://adashofparsley.blogspot.com :)
3:39 PM

Deanna Doss Shrodes said…
Thanks so much, Andrea! It's such a blessing to have you here. I'll most certainly stop by and read your blog. Many blessings and thank you for your feedback.
12:56 AM

Terri von Wood said…
Dear Deanna: This is awesome! Every word of it. There are so many like me that someone is always telling to "write about it, write a book, share your experiences" who aren't sure they should. I have been writing notes about how my blog should be for about two weeks now. Reading this was such a confirmation to "just do it!" Thank you!
11:38 PM

Deanna Doss Shrodes said…
You're welcome! Can't wait to read what you're going to write!
12:01 AM