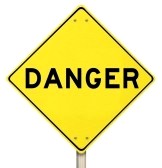 These days, a lot of speakers and writers encourage people to be dangerous -- to the status quo, to the enemy, to hell, etc.  That's a good thing.

There's another kind of dangerous we can become if we're not careful.  Even our gifts have a dark side that must be carefully watched to make sure we don't become more disastrous than dynamic.

In an article on the dark side of leadership, Dr. Tuvia Melamed says:


"Think about those high hitters who leave carnage behind them. It is very difficult to challenge or argue against them; let alone stop them...organizations try to learn to live with their shortfalls and justify it by saying that the business depends on them for its success. This is probably true, but only up to a certain point. In the long-term they can cause unacceptable collateral damage, and might bring the organization to ‘its knees’."

Dr. Melamed is not referring to bringing the organization on it's knees in prayer.

There are many angles of our dark side that we must be aware of to avoid bringing a group to it's knees in all the wrong ways.  There are hundreds of these that I could share, but just a few that jump out at me today are: