I hate this dumb question 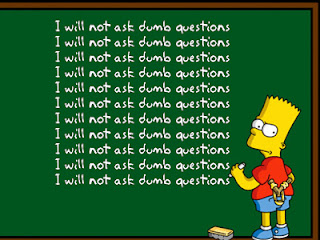 I read an article today that frustrated me.  Perhaps I was so disappointed because I've read so many like it, and feel even more pressure when I receive what I view as unworkable advice.  The article was about time management, scheduling and stress.  The basic premise of this article was the question: "What if you knew you only had six months to live?  How would that impact your daily decisions on what to do or not do?"  The article went on to advise that however you would live if you only had six months should be how you are living right now.

Although I'm all for asking people powerful questions, I don't believe this question always works in the real world.

If I only had six months to live, I'd stop flossing my teeth.  Right now.  I'd never do it again.

If I only had six months to live, I'd forget about having my mammogram this year.

Forget the pap smear too.

See what I mean?  It's a bad idea to just stop doing everything you would never do again if you only had six months to live.

Another thing is that people treat you differently when they know you've only got six months to live.

People who have been given a supposed around-the-corner-expiration-date that everyone knows about get a free pass on a lot of stuff.   Or, they have people suddenly rise up to help who would honestly never help unless they were dying.  People do whatever needs to be done to help dying people because they're...DYING!  Like dying now, not dying later.

If anything tragic happens, or even really serious happens to you NOW, you get exceptions made for you.  Otherwise, not so much.

Whenever I have a job seeker who has an open heart surgery, or their spouse just suddenly dies or something equally serious/tragic, the company makes an exception for them.  The powers that be alter anything from the date they can engage our services to the length of time they can receive coaching, and often make special accommodations for people who have these issues.  However, if somebody was just having an overwhelming week, no special favor would be granted.

I agree with my company's policies on this completely. They are very generous.   I am simply using this to prove a point.  The point is that let's say someone was having an overwhelming week however they had no operation, no heart attack, no major family crisis -- and they just started to act like they only had six months to live.  Who wants to meet with a job coach when you can go skip in the sunshine?   So, what if, instead of meeting with me, they didn't show up to their meetings and went to go skip in the sunshine?   The fact of the matter is, there would be no special favor granted to them.  If I said to my boss, "Job Seeker Johnny went to skip in the sunshine because he didn't feel like coming to his meetings the past nine weeks.  His time is set to expire this week.  Can you extend it?" you would hear my boss's laughter from here to Japan.  Johnny would lose his coaching package completely and no special arrangements would be made for him.

If I decided to not do the things I just don't want to do today, I would face whatever penalties we all face in life for not doing them under what people consider "normal circumstances."

Life might actually start to get worse, not better.

I am not sure if this resonates with anyone else but me.  It probably will make sense to Kimberly Jones.  We have the same Meyer Briggs personality type (the rarest type) and often feel alone.  If nothing else she and I can go cry on one another's shoulders when we are feeling stressed but not enough that we're going to die momentarily, thus escaping the free pass given to those who are dying.

I don't think it does.  When I wake up tomorrow, I'll still be doing the same stuff, some of which is very difficult.

The author went on to say that we shouldn't spend any time doing things that aren't our passion.  She said, "get rid of everything you have zero passion for!"

You can start to see, my life may turn into a disaster if I just decide to altogether stop doing things that aren't my passion.

I'm really starting to abhor wisdom that is so freely dispensed along these lines, because it just feels so impossible, at least without repercussions that might be worse than the original problem.

sandy said…
I would quit watching what I eat, yep bring on the killer chocolate cake with a great big glass of milk, and forget the workouts too.
11:28 PM

Deanna Doss Shrodes said…
I would do all the same things, Sandy! Without a doubt! And probably throw Five Guys on top of it! LOL
12:12 AM

Miss Mollie's Musings said…
I always hated that question. We did a whole church Bible study on One Month to Live that I really had to pray the whole way through-since I was a facilitator. I know what I'd do. Quit my job and go live with my husband in the Poconos and forget the kids having their schedules. After all they're young and could easily pick up their schedules when I'm gone. Good thing we really don't live that way. I think the focus is supposed to be on life, but I think it focuses us on death, instead.
7:54 AM

Miss Mollie's Musings said…
Oh, one other thing I just thought about- How about all those Harold Camping followers? Who is taking care of them now, as they lived that way?
7:56 AM

Angie said…
Amen and Amen. We do it because it needs to get done and we're not halfway people.
3:06 PM

Kim j. said…
Aww, you mentioned me in your blog. It is amazing how much I relate to you and now I know why. I do feel alone. Very alone. No one understands me and I realized after learning my personality that's why. It's nice to know there are a few in the 1% nearby.
7:39 PM