"Even though I didn't believe in them, it took a woman pastor to bring me back to God!" 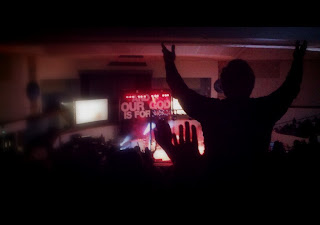 I'm always making friends outside of our church.  Of course I want to introduce people to Jesus, but I befriend them whether they ever accept Jesus or not.  I believe that's what Jesus wants us to do, what His Word indicates we should do.

Many of the people I befriend do come to Jesus, though.  I know that's not because of me, it's because of the Holy Spirit drawing them, however I do acknowledge that it's important to obey God in loving people, and being a positive impact on their lives.

I'm so happy that  today my friend raised their hand.

It was more than just the physical motion of an upraised hand.

I've exercised with this person before and we've raised our hands, but today they were raised not in exercise but in total surrender to God.  They re-dedicated their life to Jesus during the altar time this morning!!

This particular friend is someone who has been slowly moving toward a relationship with Jesus over the past year.  When I first met them they had no desire to walk in the doors of a church and had been terribly hurt.  Many people say they are hurt in a church and quite frankly a lot of people who say that are just immature. They say they are hurt because somebody forgot to shake their hand or didn't ask them to sing a solo in the choir.  I'm not talking about stupidity like that, but tragedy.  My friend was horribly ABUSED by a pastor.  After they escaped this leader who possessed a frightening dark side to his leadership they stayed at home the last five years on Sundays.  They tried desperately and unsuccessfully to move on with their life.  They just couldn't forgive for the horrible things this supposed "man of God" committed against them.  God knows they tried. And they kept emotionally limping along, falling down again and again every time they remembered the abuses this "pastor" ( I use the term loosely) inflicted upon them.  During the past few years my friend's former "pastor" was exposed for what he did , de-frocked, and is not pastoring anymore.  Thank God others are now spared of further pain by sitting under this man's leadership.  Nevertheless, my friend was still desperately hurting.

I met my friend out in the community about a year ago and for a while they didn't know I was a pastor.  I don't hide it but I don't go around announcing it either, I just live.  Once they did know it actually helped that I was a female.  Their former church was Baptist.  They don't blame the Baptists for what happened.  It was the pastor's fault, not the denomination.  However being from a Baptist background my friend --  in their words  -- "didn't believe in women preachers."  Then they became friends with me without knowing.  It was too late for them to turn back once I was found out - we already became friends.  :)

It took a long time for them to walk in the doors of Celebration for the first time.  I told them shortly after they found out I was a pastor that it would never be a requirement for them to come to church for me to help them.  I told them I'd  just be a friend and help them through the forgiveness process -- that I didn't have to be their pastor to do that.  Friends do that for friends, you know.

Over the months before they came to Celebration we went through the journey of forgiving their former pastor.  By the time they came to church they were well on their way in that process.  I think they finally got a little too curious to stay away anymore and besides that, I was doing a ton of praying. Although I know how to be a friend I also know that people need a church family.  I believe in the church and how God works through it!  I knew once they walked in the doors of CC, it would be all over -- our church is SO loving, I knew that once they found THAT kind of love in a larger community, it would blow them away and they'd never be able to turn back.  Indeed, they were shocked at how the people just surrounded them with love, but then again they do that with everyone.  It's just who they are.  It has been a joy to see my friend who once had walls up and would not discuss any of this sit in one of our Fusion groups on Wednesday nights and just let tears stream down their face while they open up to their fusion group.  Life changes!  There's nothing like it!

Still they had not "prayed the prayer" of re-dedication, even after all these months.  That's okay.  Sometimes these things don't go in the order we think they might or that some people might even think they should.  That's why at CC our slogan is:  "Belong, Believe, Become."  In that particular order.  We realize that most people nowadays need to feel they BELONG before they make the commitment to BELIEVE and then BECOME all God destined them to be.  In times past people came to a church, believed first (received salvation), then were accepted as part of the group - they belonged -- and then later God's will and purpose for them unfolded.  Not so today.    People need to feel that they belong first.

My friend has "belonged" at Celebration for 3 months now and has "belonged" in my life for almost a year.  Today when my husband preached a powerful message and gave the altar call, my friend raised their hand to re-dedicate their life to Jesus.

The other day when we were exercising my friend said to me, "Even though I didn't believe in them,  God knew it would take a woman preacher to bring me back to church!"

I laughed and said, "I hope now that you're back  in church you're not ready to leave already because your pastor's a woman...do we need to say our goodbyes??"

Miss Mollie's Musings said…
This brought tears to my eyes. Thank you for your obedience to the Holy Spirit and praise Jesus for another lost sheep returning to the fold.
5:20 PM

Melissa said…
Tears of joy! Nothing better than seeing people come to the Lord but even more so when they have been hurt so seriously and come back to the Lord! AWESOME! I do have to say that your church is a very loving church! Sean and I have often said should we ever just move to Tampa we would join you there. :) Blessings my friend! We rejoice with you today!
5:23 PM

Michele said…
Melissa come on down to Tampa- and PD love this love this a lot
9:29 PM

Apple of His Eye said…
How precious Deanna! You were doing what we are called to do be the salt and light. This is a wonderful testimony and I appreciate you sharing this so much!

Thank God for your faithfulness and friendship to this family.

God is good! What a great day!