I'm dreaming with my eyes open 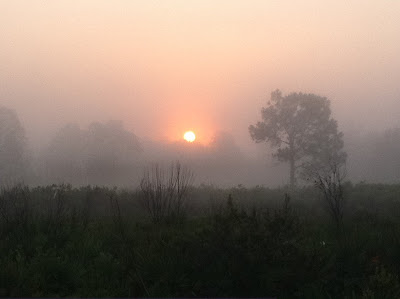 I took this photo in the well fields as I was biking at sunrise on Friday.  It was the beautiful beginning of a new day.

It's befitting for what's happening in me right now, in my life.  I'm taking steps toward the biggest dream of my life coming true.   I've had this dream as long as I can remember, but with all the specifics attached and the details filled in it's been since 9th grade.  I don't have a dream in my life bigger than this one, although there are several, this tops all.

I'm taking tangible steps, not just dreaming but acting on it.  Leslie Wolf, my weight watcher leader once said, "Five frogs were sitting on a log.  Two decided to jump off.  How many frogs were left?  Five.  Deciding to do something doesn't mean you actually followed through."  How true.

God spoke afresh and anew to me about my dream.  He cracked open a door to let me know He's serious.  I've made a decision in response and am acting on it, moving forward toward it's fruition.

T.E. Lawrence in Seven Pillars of Wisdom: A Triumph said, "All men dream: but not equally. Those who dream by night in the dusty recesses of their minds wake up in the day to find it was vanity, but the dreamers of the day are dangerous men, for they may act their dreams with open eyes, to make it possible."

It's a beautiful morning.  I'm wider awake than ever before!

What are you not just deciding to do, but actively following through on to fulfill your God-dream?