Are people truly following you, and if so, WHY?
5 questions for every leader 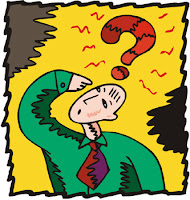 I was flipping through the channels one day and stopped to watch a TV show of a chapel service at a major Christian university, reportedly the largest of it's kind in the USA, with over 70,000 students.  The speaker that day was a professor that for the purpose of this post we'll call, "Professor Pinhead".  A major point in Professor Pinhead's sermon was the influence of bloggers.  Specifically he was upset about "young up and coming pastors" ...successful church planters within the denomination who were blogging and had gained a huge following.  He realized a lot of students were following these bloggers, many of whom had sat in the same chapel seats just a few years before, also from this same denominational background.  The students were soaking in the insights, creative ideas and wisdom of these bloggers on a constant basis.  Professor Pinhead was not happy.

His complaint was that the students were following these bloggers instead of "tried and true men" as he called them, and specifically a man we'll call "Dr. Somebody," who held a post at the school.  He said that Dr. Somebody was more deserving of the attention these students were giving these bloggers.  Professor Pinhead reminded them of the positional authority of Dr. Somebody.  He said that God had given them Dr. Somebody, and placed him in position at the school as a gift to these students, and they would do well to look to Dr. Somebody for the answers instead of turning to these unseasoned bloggers who had simply risen to prominence because they had the ability to write interesting blogs.

Positional authority is the LEAST powerful.  You would have thought Professor Pinhead would have realized that since John Maxwell has spoken at this school numerous times.  ::smile::

Leadership is influence, not position.  Although we are called to respect positional authority (and I would agree that the students need to do that) it by no means indicates that we follow most closely what we are commanded by God to respect.  We follow what we are influenced by.

In his book, Becoming a Person of Influence, John Maxwell shares that positional leadership is the most basic level.  At this level, you have a title and that's it.  You will only be able to lead based on what the title enables you to lead with.  Moving to another level of influence is based upon many other factors.  Specifically, Maxwell shares that it means moving from position to permission, production, people development and then personhood.

I realize that people do not and will not follow me simply because I am a pastor, or because of any other leadership position that I hold.  If they truly do follow me it will have little to do with my title or position.  I have realized too there is a difference between following and obeying.  I have heard leaders say, "well, they WILL follow me, or I'll show them the door..."  I might be able to force people's hand on "obeying" on certain administrative matters such as:  "no posting signs in the hallways in the church building," or "no registrations taken for this retreat beyond a certain date".  You may be able to twist people's arm in matters that really don't mean much in the grand scheme of things, but as for having their hearts, and getting them to FOLLOW that's a different story.

I always tell people who read my blog or follow me on Facebook or Twitter that I'm honored that they are following.  I thank the people at church who show up every week.  Yes, they are there to worship God, but really, they can do that in thousands of other churches.  They choose to align themselves with me as we serve God together.   I never lose the wonder!  Because I realize that they can follow anybody they want to.  Nobody's forcing them to listen, but they choose to.  I don't take it lightly when people CHOOSE of their own free will to listen or learn, or interact, or show up and neither should you if people are following you.

If you are a leader you might want to ask a few hard questions about your leadership:

1)  Are people following me?  (Don't assume.  Some leaders take off and THINK people are following them and they are simply out on a walk, that is on the days they don't have their head in the sand. LOL)

2)  If they are following, at what level are they following?  Position?  Permission?  Production?  People Development?

3)  Do I just take for granted that because of a title bestowed upon me, people will follow with their hearts and if they don't they are off base in some way?  Do I see it as my problem, or theirs if they don't follow?


4)  Am I trying to lead by authority or by influence?

5)  Do I get angry when I see others who are an influence, or do I simply determine to be the best influence and grow in my leadership skills?