Of planks and peas 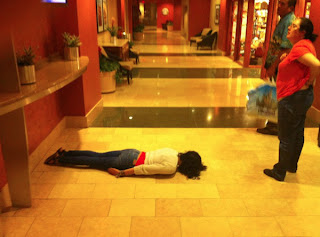 It really doesn't take that much to start a new craze.

Whoever thought that the latest form of entertainment would be to find places to lay down flat as a board and have a friend take a photo of you and post it on the internet?

Yesterday I had no idea what "planking" was and had to ask facebook friends about this new thing I saw six unrelated friends posting on their statuses yesterday.  I was rather taken aback to see the pictures of these friends laying face down on their living room chairs or cars and posting them on facebook.  It seemed a rather odd thing to do and I was curious.  I noticed that one of them labeled it "planking" so I asked and received the answer that planking is simply laying face down perfectly straight and having someone photograph you.

One friend, Joy Morey posted this in our discussion on my facebook page:  "Planking is just another trend of silliness. Nothing strange or drug induced, just for fun. I think the goal is to see how many interesting places they can find to "plank." I'll take this harmless "entertainment" over other things teens could be doing..."

I agree with Joy and am not against it, I just needed understanding as to what it was and why people are doing it.  Incidentally, none of my six facebook friends who posted their planking photos yesterday are teens.  No one could really say "why" they were doing it other than it's the latest thing to do.

At this phase of my life there really has to be a reason for me to anything.  I'm too tired to expend energy on anything that doesn't have a personal incentive.  Usually when my work is finally done at the end of the day I soak in my tub or crash in my bed but I don't care what position I'm in and certainly don't want anyone to take a photo.

Planking isn't for me, but I wouldn't be surprised one bit if my husband doesn't plank and post a photo of himself anytime soon. Just sayin'.

Something else got my attention yesterday on facebook and that's a group of people dedicated to sending cans of peas to the President of the United States.  It's called, "Operation Pea Party" and seems to be gaining some traction and there are  websites going up of instructions to do so.  Some companies are shipping them direct for you, you just pay for it and they take care of getting the peas and boxing them up and sending.  If you want to send them yourself,  the address is:  The White House, 1600 Pennsylvania Avenue NW, Washington, DC 20500.

I do plan to send some peas to the president.   What's the payoff, the incentive for me in taking time to send a can of peas to the president?  I do like to speak up about things in life that I feel strongly about.  (Hence, one reason I write this blog daily.)  I know a can of peas isn't exactly a blog or a letter, however in this case the can of peas joining what will hopefully be thousands or even millions of other peas taking over the mailroom at the White House will make a very big collective statement.

My husband can plank and I'll  send peas.  I know, I know, we're a match made in heaven, right?

Anonymous said…
As a middle aged woman who has bumps where she doesn't want them, it would be hard for me to be a plank...anywhere! haha.

Dr. Deanna DossShrodes said…
I hear you Ruth! I have the same issues! Love you
10:50 AM

Sheila said…
What statement does the peas represent? I haven't heard of this one...
4:47 PM

Dr. Deanna DossShrodes said…
The president made reference to Americans eating our peas (doing what we don't want to do). He said it was time to "pull the bandaid off" and "eat our peas." Which basically translates to doing what he wants us to do, not necessarily what all American people want to do, particularly conservatives.
8:10 PM

Rhonda said…
I have to repost this - thanks for sharing and educating us!!
10:28 AM