If you want a different result, DO something different

I know you're wondering why in the world I'd do such a thing. 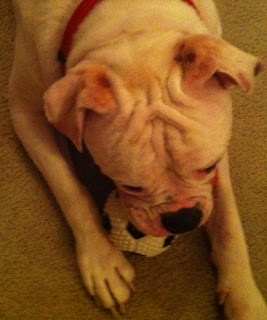 Max's ears have been torn up for almost a year now.  Every day they bleed and he scratches them and they have fresh wounds daily.  I am including a photo of him here where you can see the outside of his ears and how he has scratched and torn them up.  They hurt inside and out and he shakes his head constantly.  If you think it bothers me, you're right.  I hate to see him in pain and so does the rest of the family.  We've changed the soap we bathe him in, changed his food, taken him to the vet multiple times over the past year and he's been on topical cream, and just finished two rounds of antibiotics,  Yet it all did nothing to cure his ear problem.  When he finished his antibiotics last week I wondered what in the world we were going to try next and I continued to do what I have been doing -- prayer.  I have actually anointed him with oil a few times the last year and prayed, as anyone who knows me well would already assume.

Sunday we had Newcomer's Night at our home and people had opportunity to meet Max and Maddie.  One of the newcomers had experience with dogs and noticing Max's ear problems approached me discreetly and said, "You might want to try a little Vagisil on his ears..."  I was surprised at the suggestion but open to anything to help Max.  So yesterday I got some and put it on the affected areas a few times.  They seem to be remarkedly improved in just a few hours and late last night even Dustin said, "Wow!! Max's ears look better tonight!  What did you do, Mom?"  I said, "You'll NEVER guess."  ::smile::

What's the point of me actually doing a post about putting Vagisil on my dog's ears?  Simply this -- for different results, DO something different even if it sounds a little crazy at times.  I'm sure you've heard the saying that the definition of insanity is doing the same things and expecting different results.

How long have you been dealing with the same problems in your life, trying the same old stuff you've done over and over again to no avail?  Time for a change!  Time to DO something different.
Jesus spit on the ground and put mud on a blind man's eyes and suddenly he could see again!
It's not so crazy for me to put Vagisil on my dog's ears.

Who knows what God might use to accomplish wonders in the earth?
What might He ask you to do that's a little or a lot unorthodox?

Did I just write a blog post and relate something spiritual to Vagisil?  Yes, I did.  That's one of the things people love about me.  They know they can count on me for things like this.

Unknown said…
LOL....luv this....That is a FIRST with the Vagisil....will have to try that next time if FUDGES ears bother her....

You are right tho, we do need to "CHANGE IT UP" do something "DIFFERENT". What may seem "STRANGE" to man is not "STRANGE" to God.

On a side note: If you have wrinkles try PREPARATION H. Whatever ingredient is in it, is supposed to tighten wrinkles...Except, dont try that on MADDIE and MAX, I think they have too many wrinkles.... :-) sorry, just a litle humor...

Apple of His Eye said…
Love it and love you! I've heard you say anything will preach. You just proved that! LOL!
11:49 AM

Deanna Doss Shrodes said…
Thank you, ladies. I appreciate your feedback and your love as always. xoxo
12:07 PM