Wanna move forward faster? Join with others on the journey. 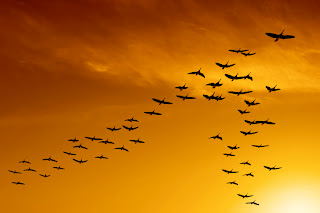 By flying in a "V" formation, birds fly 71% faster than if they would have been flying on their own.

I looked up the aerodynamics of birds and statistics on what happens when they fly together last night because I was thinking about how being on a forgiveness journey with others is affecting me.

Two kids in our church have basically rocked my world this week!  Both of them have experienced severe hurts in their past and revealed that they have  forgiven their offenders in the past week.   One of those children did not go to their class and was actually sitting with their parent, sleeping in my Sunday morning class, because they weren't feeling well.  They woke up for a few moments just as I was sharing something about the forgiveness journey I'm on, and giving the illustration of how this other child had forgiven the people in their past who hurt them.  When the child woke up and heard that, God spoke to them to forgive their offender.  During praise and worship time in the service, they began weeping and told their parents afterwards that God did a work in their heart about forgiveness.

Many more people have e-mailed or facebooked me and said, "I'm on the same journey, Deanna!  I'm doing it and you're encouraging me!"

Yesterday I said that at times on this journey I've felt like I'm being carried on wings of grace.  I realized last night that something in addition is that I'm being carried on the wings of others who are on the same journey.  As we all fly toward forgiveness, there's a synergy that happens.  Through the mutual encouragement, the flight to wholeness is not only more bearable, it's faster.  We are not standing still - we are very much moving forward.

Last night on Twitter, Madea said, "Life is like a taxi.  The meter just keeps-a-ticking whether you are getting somewhere or standing still."  Indeed life is too short to stay stuck in the quagmire of unforgiveness while life goes by.  There is a real need for us to get unstuck and move forward.  Moving forward is easier when you're doing it with a group who are all committed to the same thing.


"Bear ye one another's burdens and so fulfill the law of Christ."  Galatians 6:2

Anonymous said…
I'm with you on this journey! Some day I'll share my story with you... Thanks for encouraging me more than you can possibly know!
Christelle
1:21 PM

Deanna Doss Shrodes said…
Thank you Christelle. Your posts are also inspiring me on Twitter about the Love Dare although I'm not sure I'm up to it right now...this journey I'm blogging about is enough emotionally for me right now if you know what I mean. Maybe the Love Dare will be next for me once I get my E.E. back = emotional equilibrium. lol Love you and thank you for sharing.
3:33 PM