My husband is going to be married to
four or five women before it's all over... 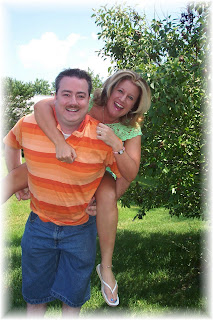 The other day Larry and I were talking to some friends who are going through some "growing pains" in their ministry and we told them about how much we've grown and changed over the 24 years we've been married.

You don't know something until you know it.
You never know what life holds 'til you live it.

Some things never change for us - like core theological beliefs and values, but other things have definitely changed - some slightly,  others completely.

How I feel about many things in my 40's is radically different from when I met my husband as a teenager in bible college.  I told him things back then that I'd never do, things I'd always do, things I'd always believe, things I'd never believe.  Guess what -- a lot of that has changed on both our parts.  For a while we held each other to those things but no longer do.  This has usually resulted in an adjustment period for the person who is adapting to the other person's change. As long as one is able to accommodate that change and flow with it, things are eventually really good.  If one party is not willing to adjust, it can be REALLY bad for a while, even disastrous.

Twenty four years ago a lot of things that are in my life now never existed then, at least for me.

Back then I never imagined that I'd be a certified job coach.  I'd never even heard of that and believe me it took me by surprise as much as anyone else in my life when God led me into it.

I would have thought you were crazy back then if you told me I'd make multiple trips to Africa and be a part of four tribes and have part of my heart longing to be there all the time.  At first this was a great source of friction between my husband and me.  He didn't understand my passion, new priorities,and all the emotion that came with my love and commitment to Africa.  In fact, he thought I needed therapy.  I would sit in the bathtub and cry over people who didn't have water or bathtubs.  I cried every day.  I longed to be back with the people I loved there, attempting to make some kind of difference in their lives.  Larry knew nothing of Africa or her people (still doesn't compared to me as he's never been there) and it was very hard for a while for him to grasp any of the significance of this in my life until he came to see what God was doing in and through me.  A wise friend of mine told me to be still and trust -- that six months would be about what it would take for him to understand the new me in this regard.  They were right.

I would have never imagined that I'd give so much of my life to women's ministries.  When I met my husband I was just a teenager and thought WM's was the most lame ministry ever.  I thought the ladies of the church did nothing but sew pillowcases for missionaries or collect dimes.  I said, "I'll never lead the WM's.  How boring is that?!"  Famous last words. Incidentally I've been doing this for a lot of years now and never made any pillowcases or collected dimes.

Before I had kids I said, "we are NEVER gettting our kids phones.  How pathetic!  What in the world do kids need phones for?  Over my dead body will my kids walk around with phones.  It's completely unnecessary!"  I stuck to that for a long time and smugly thought all the parents who got their children phones were ridiculous. Then Columbine happened.  We got our kids phones right after that.  I had to know they could reach me anytime, especially if they were in danger or trapped somewhere.  I have eaten my words on this and many other things so many times!

Larry has changed in many ways too and as long as I've been able to keep an open mind about things and pray about the changes God has made in his life - and eventually accept and flow with it, things are good. We have to give each other permission to change and grow, otherwise we stagnate as people and as a couple.

Growing pains are hard when you're going through them but when you get on the other side of them you appreciate the wonderful new thing God is doing in your partner.  My husband has already been married to a few different women...all of them were me, just in varying stages of growth and change.  I'm sure he's holding his breath to see what's next...me too.  :)

Anonymous said…
Deanna, great post. We are just clay in His hands. When couples are both in God's hands, the molding and making into vessels He can use is something encouraged. We're both married to great men! :)
11:21 AM