Is there something down in there? 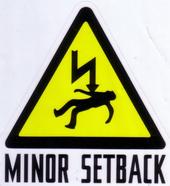 Nine weeks ago I got a splinter or some foreign object underneath the skin of my index finger.  I thought I worked on it successfully and got it out, but I didn't.  I even had Larry work on it for me one night, but days later it still bothered me.  I was getting a nail fill one day and asked my manicurist, Lisa, about it.  I said, "just take one of your power tools and sand it down as far as you have to until it comes out!  I'm tired of it!"  She actually obliged me on that and tried it but after a few seconds stopped and said she didn't want to hurt me, but knew there was something down in there.

I went home, took a needle and thought I got the particle of whatever was in there out, cleaned it out and put antibiotic ointment on it and thought it would heal up.  It just kept hurting.  This isn't good for someone who is always playing the piano or typing, I assure you. It really affected me every time I touched something with that finger although I never complained to anyone but Larry.

I have been through four of these little "at home surgeries" where I thought the problem was resolved only to have it hurt again.  Finally yesterday I think I've gone deep enough to solve the problem.  I was soaking in the tub for a long time on my day off and when I was done I noticed a teeny tiny spot of brown something had come to just under the surface of my finger.  I got out of the tub and went through another "surgery", and this time, I'm happy to report,  something does feel different.  I'm truly sensing that it's out, and yesterday when I went to get a nail fill  Lisa looked at it and she said, "yep, I think you got it out this time."

Emotional pain is sort of like that too.  We can think we have it all resolved - convinced that we got it all, and then something comes to the surface and starts hurting like the dickens.  We really do have to make sure we've gone deep enough to get it all.

This weekend at Celebration I'm talking about the ups and downs of our forgiveness process.  Sometimes we think we have the issue resolved and then something comes up, perhaps a new consequence of our offender's actions and we are suddenly face to face with the pain again of what was done, fresh and anew.  When that happens, we're not a failure, we just need to get it out and move forward.  Set backs don't have to keep us back -- set backs can be set ups for our next level.

A few weeks ago I thought I was moving forward on my journey to forgiveness.  Then, "wham!" and "wham!" two new revelations of things I'm going to have to walk through as a result of my offender's sinful actions came, without warning.  Driving home by myself on the day these things came to light,  I was overwhelmed in a moment of disappointment and exhaustion and anger all rolled into one.  It suddenly hit me and I began to melt down into tears.  Not wanting to continue driving in this state, I had the presence of mind to pull off the side of the road.  I dialed a friend's number who has walked through this with me.  At first all she did was listen to me bawl my eyes out without saying anything.  Then she said, "Give it to me, as hard as you can for five minutes."

"Don't censor it, don't worry about how it comes out, just pretend I'm them, and tell me as transparently as you can what  you've lost as a result of their actions."

"Really?  Can you really handle me blasting you that way?  I don't think you know the depth of what's in here."

I did so and felt like I was completely emotionally wrung out afterwards.  "Wow, that was pretty good!" she said.  Apparently I'm pretty good at blasting people to smithereens when I have permission to do so. I was so grateful for the safe place my friend gave me that day and the emotional surgery they accompanied me on.

After I got all the gunk out we talked about practical steps to move forward with the new information that was my reality at the time.

I wasn't a failure.
I had a momentary set back.
We turned it into a set up.

Sometimes it takes multiple times of working on something to get all the gunk out.  Just as I worked for the past nine weeks on my finger, I've worked a lot longer on this forgiveness thing.  I'm still pulling gunk out, still putting spiritual ointment on, still allowing Father God and trusted friends to bind up my wounds.

There might be something still down inside you emotionally that's surfacing and causing you pain, especially every time something touches your life and makes it uncomfortable.  Trust God and some Godly friends to help you get it out. It will feel so much better when you do.

I think this week might be the first time in nine weeks that I've played the piano at Celebration and it hasn't hurt.  ::happy dance::