Wait a minute, how do you KNOW your Mom's in heaven? 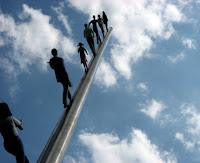 Right after Osama bin Laden's death, many were posting about his eternal destiny, and their feelings about what happened.  I noticed that on facebook statuses and blogs there were some people who were quite upset that others had assumed that Osama is in hell.  There were those who were angry that he was killed in the first place, and others who said, "how dare anyone assume that someone else is in hell!  Who are we to judge?"
The other day my husband brought up a point that I thought was absolutely brilliant.  I'm posting it because it's much too good of a gem to let pass by and just stay with me.  Before I share his gem, let me lay some ground work...
First consider this about Osama's situation:

Rhonda said…
Awesome post, great comment, Larry and so true to the core. I think you need your own radio show :)
9:19 AM