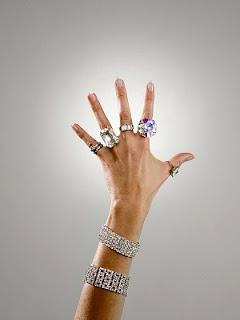 "I would have bought your CD's or one of your books, but I can see you really don't need the money..." said a man at the product table of one of my friends who is a full time evangelist.  As the man said this to my friend, he nodded toward the bracelet she was wearing that gave the appearance of diamonds all the way around it.  My friend quickly answered back to the man, "Wow, you just missed a tremendous blessing, sir!  All over a $5 bracelet from Walmart!!"

He was at a loss for words.   (Yes her bracelet really WAS from Walmart.)  He's the one who missed out on a blessing!  My friend's CD's are amazing!!!

One day we were sitting at a couples dinner that was held at our church and a man sitting at our table said to me, "You know, it would be really nice if my wife could dress like you but you know, we really just don't have that kind of money."  I almost choked on my food, I was so shocked.  I said, "Oh, you mean dress like this?  Like what I'm wearing now, or what?"  He said, "Well yeah..." and I said, "Most anyone could afford to dress this way.."  I explained to him that I paid less than $10 for my entire outfit.  One of my passions is shopping in secondhand stores and I have brought name brand suits home with the tags still on -- Ann Taylor, Jones New York, etc.

A friend of mine also does a lot of bargain shopping.  She looks like stunning all the time and she rarely pays more than $10 or $20 tops for an outfit but she looks like she just walked out of a magazine most times when you see her.  For this reason many people think she is financially wealthy.   I have been with her when unbelievable (or quite honestly offensive)  things have happened like people asking her to pay for them for something, assuming she can afford it more than they can!  People ask her for personal loans all the time large and small and say, "Hey, I know you've got money."  I would get angry if people did this to me but she takes it in stride pretty well and laughs and asks them, "what in the world would make you think that?"  She lets the entitlement attitude from these people roll off her back and handles it great. I don't know that I'd do so well. She actually doesn't have a lot of money, but people assume that she does based upon her appearance.

Remember, the Bible never says that money is the root of all evil, simply that the love of it is.  It's not wrong for people to have money or to be blessed however even if they are that's quite frankly none of your business and means nothing for you one way or the other.

No matter how a person may look, you really know NOTHING about their financial situation or possessions.   Really consider your words before you speak, or you may miss a blessing!!  The man who refused to buy my friend's products simply because he thought she was too wealthy as it was, really missed out on taking home one of their CD's or books, and investing in a ministry that is changing lives.

Anonymous said…
Amen!! God blesses me, also, in so many ways! I was at a couple yard sales and bought two boxes of Christopher & Banks and B. Moss clothing for 25 cents each item. Maybe they were worn once! If we have the right heart, and honor Him, He will bless us beyond what we expect. My outfit on Mother's Day cost 50 cents! With God, we can have a 5th Ave. closet on a yard sale budget!
Love ya! Ruth
8:15 AM