February 14, 2011
Loyalty between a lead pastor and associate can serve as a relationship super glue.  It's why my husband and I are not only FRIENDS with our former pastors, Randy and Dawn Visconti, that we worked under for years, but we are FAMILY.   Our kids call them "Uncle Randy and Aunt Dawn" and they remain a very real part of our lives although we are separated by a few thousand miles we call often, e-mail and even visit in person.  There's nothing I wouldn't do for them, and I think the feeling is pretty much mutual.

Over the years my husband and I have served with many people on staff.  Two couples that stand out who have been stellar in this arena of  loyalty and service would be Pastor Trinity and Misty Mackley (who I've written about here on the blog many times) and Pastor Sam and Tamara Diaz.  These two couples did nothing but loyally serve the Lord, my husband and I, and the church over the years.  They remained true to us not just while they were on staff, but once they left.  Both have moved on in ministry but we have supported them in any way we possibly could and they know they can count on us, for anything.  They do call us and ask for everything from a listening ear to a reference and we happily oblige.  They will be able to count on anything we can possibly help them with throughout their entire lives. 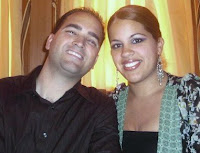 A few years ago, Pastor Sam and Tamara moved to another place of ministry with mine and Larry's full endorsement and support.  We have remained very connected and several years ago my husband said to me, "Sam will be back, I just don't know WHEN."  We actually  helped him get two other ministry positions (where he excelled, but at both places his lead pastor moved on, which required him to do so as well.)  I have often commented even to all the new church people who don't know him  that when you look up "trustworthy" or "administrative" in the dictionary, Sam Diaz's photo is there.  We could always count on him to do just what we asked, and he never served his own agenda - he was and is a true armor bearer.  I think Pastor Trinity might have gotten tired of hearing about him although he never said it!  (Smile)   He  never actually worked on staff with Sam but probably felt like he did after hearing Sam, Sam, Sam out of my mouth all the time.  But the truth is, I grew to appreciate Trinity just as much as I did Sam!!!  As far as associates go I have never had another staffer at the comfort level that I personally felt with either of them. 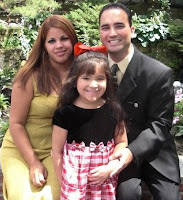 Well, yesterday we made the big announcement in service -- Pastor Sam is back with us on staff!   Here's the amazing thing about the favor of God...we couldn't afford to re-hire him at this time.  Just as with many other churches, the economy has affected us at this time. So we would have never asked him to consider coming back right now.  However something has been stirring in their hearts over the past few months, and Sam called and asked to meet with Larry and me and said he had something special to talk to us about.  When we sat down to talk he said, "There's something I'd like you to consider and pray about.  We really feel God is calling Tamara and I back to Tampa to be with you guys and we want to offer ourselves, without salary, to you to help in whatever way we can serve.  We believe in you guys, we believe in this church, never were we happier than when we were with you, serving on staff with you and we really believe God has called us to come alongside you and partner with you in getting CC to the next level, as well as have the privilege of continuing in being mentored by  having you as our pastors.  Never did we learn as much as when we worked with you and we want that back in our lives again up close and personal."  Wow.  Wow.  Wow.  My husband knew it was coming but still I sat there in amazement at the meeting thinking, "God, you are totally blowing my mind."   It took us...well, all of about 2 seconds to pray about it.  Actually, it took a week.  We met, talked, prayed and met again a week later and finalized everything.  Sam has a full time job teaching high school and will be assisting us with his other waking hours.  They will be moving to Tampa from Orlando ASAP and are commuting until then.  Is God amazing or WHAT? 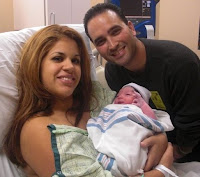 Interestingly enough a few weeks ago, the man from Alabama (John Carnes, who has visited CC probably four or five times since then on his trips here) came and asked to pray over my  husband and I privately.  He said that he sensed in his spirit that we needed more laborers to help us with the growth that has hit our church in the last eight months.  He said, "As I prayed about it today I really feel God saying that "the laborers are on the way."   This was just a confirmation of what God told my husband a few years ago, and specifically showed him that Sam would be back in due season.  Now it's come to pass.  God put in my spirit that this not just mine and Larry and Celebration's "New Season" -- it's our DUE SEASON!!!  In addition to having the most amazing children's pastor in the world, (Pastor Adam) AND our very own Dustin working with us, we now have the Diaz's joining forces with us.
So Sam and Tamara and their precious girls -- Anneliese and Samara and the new little boy on the way (Josiah - due in March 26th ) are in the house...ALL THE TIME, not just occasionally for a visit!!!  Sam is specifically going to focus in on helping us with discipleship, grant writing, and a few other key areas of the church that really need a boost for us to go to our next level.   So shout now, somebody!!!

There were some other very significant and amazing things that happened behind the scenes this week but I can't talk about it yet.  And that drives me crazy, because I hate holding things in whether good or bad, but you'll just have to wait!

Anonymous said…
So happy for you! And can't wait to read what the Lord is doing in your lives!
5:51 AM