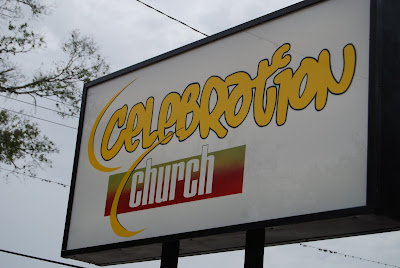 Yesterday was seriously like a day unlike ANY other we've had thus far in all our years of pastoring in Tampa Bay...particularly on what we would call a "regular" Sunday if there is such a thing at Celebration.  By regular I mean it wasn't a holiday ~ special event ~ outreach, etc.  There's no explanation other than GOD and the momentum that has been happening for about eight months ~ since June 27, to be exact. Which happens to be mine and Larry's wedding anniversary, interestingly enough.  :)  That was a turning point at CC and we've never looked back.

We have been in a much increased time of prayer and seeking God and things are really breaking open.  Last night one of our leaders, Bill, mentioned to me that he has NEVER seen our church in the absolutely electric "super charged" atmosphere that was present yesterday.  God is doing a whole new thing.  It started before the Christian Education hour even began and by the time the worship team ascended the platform at 10:30, it was so intense. The spiritual atmosphere was just at a whole 'nother level than we've EVER experienced it.  Not to mention...we had A TON of visitors...maybe 20?  Most important...SALVATION was in the house!!!  That NEVER get old.

By the time I got home yesterday I was totally spent.  We had choir yesterday afternoon and that completely wiped me out -- we are working hard for an Easter Outreach that is going to be HUGE.  I got home at 3:30 and Larry and I started putting the finishing touches on our Superbowl party.  We had a small party -- just a few people over, as when my husband's team is in the Superbowl he likes to really be able to concentrate on the game and not be interrupted, especially by kids running in and out and stuff like that.   Obviously our team didn't win this time but we've happy for all of the loyal Packers fans who stand by them year after year and deserve this win.