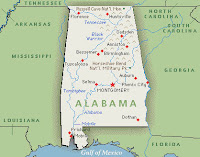 I said I'd be back to blog twice in one day (I rarely if ever do that) but wanted to wait til' I got some rest after last night's party to blog about this with clarity.

Wednesday night we had a visitor in our Fusion service at Celebration.  I never got to meet him – he came in as the service was starting and left soon after the conclusion while I was still on the platform, but a few people met him and told me he was from Alabama.  He was here on vacation –  and comes to Tampa with his family a few times a year.
Thursday night I was shopping with Savanna at the mall.  As we were walking down the mall I heard a man call out, “Pastor Deanna!!!”.  He touched my arm and I turned and it was this same man from Alabama.  He said,“I was at your church last night – I’m here on vacation from Alabama…” and I said, “oh, I didn’t get to meet you but how funny that we’re meeting in the mall here tonight…” and he said, “no coincidence…God gave me a word for you and the church and now I have an opportunity to tell you.”  Then he proceeded to give me this word that God put in his spirit.  It was definitely right on target.  Keep in mind this man knows nothing about me or the church but it was a supernatural word - VERY timely with some circumstances that we have faced.  I wanted to run up and down Wiregrass Mall and scream and shout.  When I told a few of my friends last night about this word they DID shout and scream.  At the tail end of 2010 God gave us a confirmation to go into the new year with, knowing more than ever that His favor is upon us!!!   I believe that when you receive a word it's usually nothing you didn't already know (it simply CONFIRMS what God has already put in your spirit) and it always agrees 100% with the Bible.  This word did both.
I thanked him for being faithful to tell me this and then said, “Where in Alabama are you from?”  He said, “Oh I’m sure you’ve never heard of it…it’s a little town outside Huntsville called Hartselle, AL.”
I said, “not only have I heard of it but I was there two months ago in person!!”  He was AMAZED that I knew where his little town was.  I explained that in addition to being a pastor I am also a career coach and that I had to go to Hartselle for 2 days on business for my company when a plant there shut down in October.  My boss Kathryn and I were sent to do an introductory meeting and job fair for the employees there, who were displaced as a result of the shut down.    Hartselle is one of the cutest little towns I've ever visited and in all of my dealings with the people there I have experienced nothing but amazingly friendly people.  When I researched it a little bit I found out that it's listed as one of the 100 best small towns in America!   I can understand why.
The man I speak of comes here a few times a year with his family on vacation and will be attending CC when he comes to Tampa.
This year WILL be a year of breakthrough and freedom like never before.  God said it and sent a man from Hartselle, Alabama to confirm it.  Thank you, Lord!

Melissa said…
Oh how I love how God orchestrates things to get a specific word to you! That is sooo cool! Looking forward to hearing about all that God has for you and for the church!
8:08 PM

Rhonda said…
Isn't God amazing??? I love reading stories like these - thanks for sharing!
9:49 AM