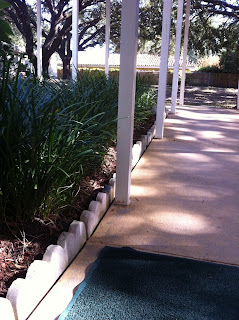 The other day we were having a work day at the church and I was working outside in our courtyard area with some other people and one thing I really wanted to do was trim the plants that were touching the sidewalk, and straighten the white scalloped edging that lined the sidewalk.  It's been on my mind each time I walked down the breezeway and saw that it needed attention so this was one thing I took delight in personally working on.  Each time I walk on that path I get a sense of accomplishment about all that we tackled on that work day.  I get so high on progress that I whip out my cell phone to take a photo of plants I just trimmed.

A sense of accomplishment can come pretty rapidly from a church work day, but seeing results in people's spiritual lives takes quite a while.   It might take years to see any progress in someone's life and even when you do there are periodic setbacks.  Still there is nothing more rewarding than seeing people come to the Lord and seeing people grow in Him  -- it never, never never gets old.  Being a part of breakthroughs in people's lives is something that nothing compares to.  I savor these victories.

Work days and projects give me a high but so does career coaching.  Studies show that the majority of people who get help from a career coach will be hired twice as fast as those who don't have help.  In my job as a coach I have opportunity to see progress in making what our company calls engagements (getting people committed to the program) as well as helping them get hired faster, with a better job than they thought possible in many instances.  That is very personally rewarding and something I'm very thankful to be a part of.

I've told my boss Kathryn a number of times that I feel like career coaching has saved my mental health.  For a person addicted to progress, ministry can be difficult as you may not even know until heaven the majority of the progress you've made.  I'm coming up on two years of career coaching in the next few weeks.  I can't believe it's been that long already.  It feels like yesterday that I got started with this but in many ways it feels like I've been doing this all my life.  Seeing what God has done in some of my job seekers lives over the past two years is amazing.  I say what God has done because whether they know God or not, I've prayed for them.  Maybe they didn't know it (I don't bring up God unless they do) but I do pray for all of them.  They've been good for this gal who's addicted to progress.

Through being involved in career coaching  the past two years I've come to believe that perhaps it would be good for every pastor to be involved in something where they could have an outlet for faster progress.  It doesn't have to be a second "job".  It could be as simple as planting a garden. Tomatoes will grow faster and more consistently than some people.  And while you are waiting on your people to grow, you'll have something yummy to eat.  :)  It's just a thought...

Apple of His Eye said…
Your breezeway looks wonderful!

I'd love to see your church sometime.