Don't jack with a Godly leader 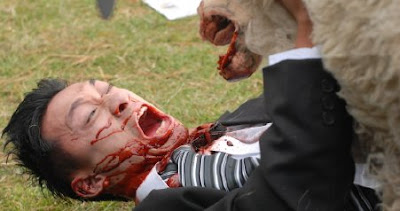 Why do so many sheep think they can attack a shepherd and get away with it? Make no mistake - shepherds get bitten and they may bleed -- in fact they may bleed profusely for a while, but an attacking sheep will never ultimately win in a battle with a Godly shepherd.

Remember how when you were little you thought your Momma had eyes in the back of her head?    You took a cookie from the cookie jar when she told you not to, or skipped school and you thought you were getting away with it, but word always got back to them.   The Bible says that your sin will always find you out.  Your siblings told on  you for stealing the cookie and the teacher called to let them know you missed 6th period english when you were supposed to be there.  Yet you did it anyway and then had the gall to get mad at your sister for telling on you about the cookie!  You blamed your teacher for telling your parents about you skipping school instead of taking responsibility for your actions.  Momma didn't buy that and you STILL had to pay the price for all that mess you caused.  Pointing the finger on those who tell on you is always easier than owning up to your weakness but just digs a deeper hole than the original one you had already dug for yourself.  Really, did you think your mother was never going to find out?

We see people all the time who jack around with God's leaders and think they are just gonna keep up their sorry behavior and get away with it.  How naive.  The truth is, a spiritual momma or daddy doesn't even need a human being to call them and inform them of a sheep attack because a shepherd who is in tune has the 4-1-1 from a greater source.  When they are on the same frequency as the Holy Spirit, He'll tell them things.  In fact, as a shepherd you know in your spirit about something before you even know about it in the  natural.  That's a blog post in itself.

Just as God protected Moses and dealt with people like Korah, Dathan and Abiram, He does the same thing today. He's the God who hasn't changed.  He's perfect so He has no ability to change.  Malachi 3:6 tells us that God does not change and Numbers 23:19 goes on to say he does not change His mind nor speak and not act.  The same God that dealt strongly with those who spoke against Moses will also deal strongly with those who attack a shepherd today.

I have learned as a leader that all I have to concern myself with is knowing God.  If I know God intimately He'll take care of telling me what else I need to know.  He'll take care of giving me whatever else I need for the journey.  Look at the example of Moses.  He just kept getting on his face before God no matter what happened.  He didn't run around trying to find out information -- He just sought God and everything He needed came to Him!!  If you are a leader reading this, I encourage you -- don't worry so much about what people may be saying about you.  Just KNOW GOD.  Get on your face before Him.  Pray your guts out.  He'll fill your toolbox with everything you need whether it be a word of wisdom and knowledge, discernment, or other Godly leaders to be your armor bearers.  He will send people to lift your arms, just as Moses' arms were lifted by Aaron and Hur so He sends people to lift the arms of the men and women who are leading His people.

I have seen this proven time and time again in my life.  One time when we were pastoring our previous church I was in prayer and God gave me a word about an ENTIRE CONVERSATION, WORD FOR WORD that a disgruntled person in the church had with three other people in their living room late one night.  (What's the significance of the location?  Well, it was their private residence and I had no way of overhearing this information from a human source.)  I wondered at the time why God gave this to me.  Why would God share the contents of a toxic conversation with me?  I said, "God why are you telling me this and what am I supposed to do with it?" Bizarre!  He said, "Just hold on to it and I'll let you know when to release it."  A few months later right at a strategic moment I was able to expose that information with those involved and say, "This is what the Lord has shown me" in great detail and they knew knew it had to be God - there was no other way I could have known.  They were stopped in their tracks, paralyzed from speaking any more of that filth, and rendered powerless because they honestly had the fear of the Lord about what other conversations He might disclose from the heavenlies.  :)  LOL

In a situation here in our church in Tampa I had no idea in the natural what was going on but I was in a time of particularly deep intercession and the next thing we knew several people came and literally threw themselves down crying and repented for some things they had been involved in speaking that we didn't even know about!  Amazing.

Don't jack with God's leaders and think you're going to get away with it.  People won't keep your confidence.  Do you know why?  Because it was unGodly of you to ask them to keep such a thing in the first place.  It will eat them up.  Every time they try to get in God's presence it will be almost unbearable for them.  They can't freely worship because what you asked them to keep "just between you" was a load of garbage.  And that load of garbage is now standing between them and God and it will be a gigantic roadblock to every prayer they pray until the sin is exposed and dealt with.  The truth is that God will drive them with conviction until they come forward in repentance.  They will tearfully apologize to the leader for ever speaking against them or listening to someone else speak against them -- they will cleanse themselves of that filth that they were exposed to or involved in , and be restored to right relationship with that leader and ultimately to the Lord. (Leaders are appointed by God Himself.  The Bible says when you rebel against authority you are rebelling against God.)  Therefore here's what many times will happen - they will be restored to God, to the leader, and then you will be standing alone holding your filthy bag.   In fact, those who apologize to the leader and rebuild trust may even have a stronger bond than they originally had!  (Because that's what God can do!!  He is a restoring God!)   For the unrepentant attacking sheep perhaps the worst thing they eventually face is the spiritual solitary confinement they cause -- boxing themselves into a dark and lonely place by their rebellious actions.

The shepherd won't take vengeance upon the attacker -- (they know it's not their place biblically plus the fact that they are too busy being on their face before God and making a positive difference in others lives).  The shepherd will just go on to do what they do -- LEAD.  But God won't let an attacking sheep just trot away and go on their merry way like nothing ever happened.  The best thing for the attacking sheep would be for them to go as quickly as possible and ask for forgiveness.  God will forgive them, of course, and if  the shepherd is a man or woman of God, they'll receive forgiveness from them too, although it takes time to build trust again.   If the attacking sheep is stubborn and decides to just go about their business they should know it's all going to eventually unravel for them.  It's a hot mess when it does.

There is grace and mercy for this, but only for confessed sin.  No where in the Bible does it say that God forgives unconfessed sin -- only that which is acknowledged with genuine repentance.