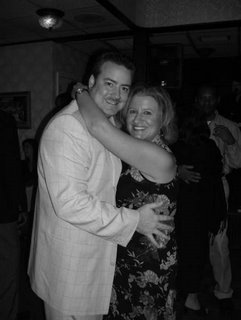 Today is my beloved's birthday.

I was really blessed yesterday wondering if it was my birthday instead.  He helped me with the Christmas trees, (all SIX of them) and even fixed the broken one and went out and surprised me by getting pink lights for it and putting it in our bedroom.  Then he cooked dinner.   Jordan got him a cast iron dutch oven from Cracker Barrel and using his new cookware (yes, it's his although I'm sure he'll let me use it)  he made beef stew and biscuits.  It was so good.  He's a great cook.

I have a small gift for him today and then we'll go shopping and have him pick something he really wants, from me later this week.  He's a hard person to buy for and most times I have him select whatever it is that he wants to make sure it's what he really likes.  I've gotten him a lot of gifts that have really bombed so I like to err on the safe side.

I'm very thankful for him...it's such a blessing to be married to a man of God -- one who is a good father and cares about things like pink lights and being there for his family.  I've also said over the years how thankful I am that he's such an even keeled spiritual man..."stable" for lack of a better word.  I've never had to worry about his faith.  He's rock solid in his devotion to the Lord, and his commitment to the Word of God and truth.  That is no small thing to me.  I've seen a lot in my time and the more time that goes on I'm thankful for a husband who is not a flake.

I love you, babe!  My prayers are with you, everyday, that all your dreams and more might come true.  xoxo  ~Sassy