Who are you to judge me? 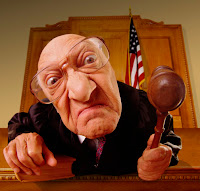 Walk through this scenario with me...

John Smith is tried for that crime, found guilty and sentenced by the judge to 20 years in prison.

You are a witness to this.

Some days later John comes and asks you, "so, what's going to happen to me?" and you simply respond, "Well John, the judge said that you are going to serve 20 years in prison."

Have you just judged John?  Actually no, he was judged by the judge.  You never judged him, you simply repeated what the judge said.

In another related scenario, let's say  a mutual friend who knows you is aware of the case asks, "so, what's happened with John Smith?" and you say, "Well, the judge sentenced him to 20 years in prison..." Did you judge John by telling your friend this?   No, you are simply repeating what the judge said.

There's a lot of talk these days about judging. People decry how wrong it is to "judge" and if they are referring to the true act of judging I would agree with them.  But there is a difference between actually judging someone and simply repeating what THE JUDGE has already decided.

While we don't know everything about the future there are some things we do know because the Bible already declares them as so.

One time a lady came to my office at the church to talk to me.  We already had a rapport - she had been coming to the church a few months and I had welcomed her with open arms and she felt a comfort level with me.  She came in to talk because she was in an affair with a married man and in a lot of anguish.  She wanted to know what she should do, and what would happen to her if she continued this affair. I told her, "I'm not a psychologist, nor a counselor.  I am a pastor who gives biblical wisdom.  I  will share with you what God has already said in His Word, not my opinion.  It's not up to me to judge or decide what you should do.  So, let's look to God's Word together.  I gave her nothing of my opinion I simply opened the Bible, and read to her a bunch of verses containing what God Himself says about the situation.  And with that she burst out crying, got up and walked out.

I suppose I could have shared a bunch of verses about Jesus feeding the 5,000 or Noah's ark, or the Sermon on the Mount, but with plenty of scripture that speaks directly to her situation, why would I do that?  God's word is relevant to our everyday life and gives direction about what to do if you are in an adulterous affair.

Now, did I judge her?  No.  Not at all.  I simply repeated to her what God says about adultery, what takes place if one does not repent, and the grace that is available for one who does.  It wasn't my words that she had a problem with, for it wasn't my words that were shared.    She wanted desperately for me to agree with her situation.  I accepted her, I loved her, but I also shared truth when she asked.  Not my truth  -- God's truth, straight from His Word.  My opinion is irrelevant but the Word stands for all time.

It's very fashionable these days to chastise anyone who takes a stand for anything by declaring what God has already said.  I encourage any Bible believing Christian who is reading this to not back down on sharing truth just because someone accuses you of judging.  If you are simply repeating what God has already said  it's not you they have a problem with.  There's an old fashioned term for this:  Holy Ghost conviction!

Anonymous said…
Usually, when someone says "Aren't you judging?" I respond with "By their fruits..." Now I'm just going to say, "No, God already has." Very good word, and much needed for Christians. As a culture, many are so worried about being politically incorrect, that truth is silenced. Good Word!!
6:20 AM

Melissa said…
Very good word and timely! Ruth I love your answer "by their fruits!"
6:59 AM

Rhonda said…
that's what I love about you - so straight forward and honest. It is our job to point them back to the cross - that's exactly what you did!
8:00 AM

I would take it a little step farther personally.

1 Corinthians 5 (New King James Version)
9 I wrote to you in my epistle not to keep company with sexually immoral people. 10 Yet I certainly did not mean with the sexually immoral people of this world, or with the covetous, or extortioners, or idolaters, since then you would need to go out of the world. 11 But now I have written to you not to keep company with anyone named a brother, who is sexually immoral, or covetous, or an idolater, or a reviler, or a drunkard, or an extortioner—not even to eat with such a person.
12 For what have I to do with judging those also who are outside? Do you not judge those who are inside? 13 But those who are outside God judges. Therefore “put away from yourselves the evil person.”

Apostle Paul made it clear we can actually judge "those who are inside"(v12), meaning those who are a part of the local church.
3:55 PM

Deanna Doss Shrodes said…
Random Intensity, you are right...the Word says judgment begins the house of God. May the Lord help us...
10:52 PM

Deanna Doss Shrodes said…
That's quite alright! Love you
10:22 AM