So another church is reaching the dogs... 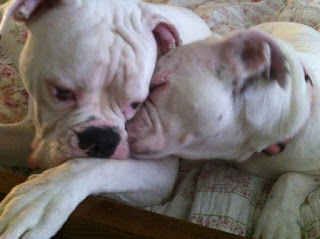 If there's one thing I learned during the neighborhood prayer blitz on Saturday it's that people LOVE dogs.

Every house but two that Sue and I went to had dogs.  I had as much fun meeting the puppies as the people!!  There was one lady who had six or eight of them!  Another house where we rang the doorbell but no one answered had so many dogs we made a game out of counting all the different kinds of barks to try to figure out how many dogs were behind the door.

When we came back to the church and compared notes with all of the other teams, they all remarked about how almost all the houses they went to had dogs.  This was true whether we were in high, low or middle income neighborhoods.  Sue and I went to one house that was probably a 4 or 5 million dollar house and we went to some poor areas too.  No matter where we went there was one thing in common:  DOGS!!!  DOGS!!   AND MORE DOGS!!!

Months ago I suggested to our leadership team at Celebration that we have a "blessing of the dogs" day as an outreach.  A few key leaders thought I had lost my mind.  They've had more than a few good natured laughs at my expense.  Well, on Saturday Sue pointed out to me a church sign from another local church and guess what they are doing?  "The blessing of the pets"!  Yep, they beat us to it.  More power to 'em!  I bet it's going to be a huge success and I wish them well.  Sue is thinking of taking her cat to this other church and if I thought I could control Max, I might just take him and Maddie.  (Max is quite literally a bull in a china shop at this point...)  Instead of them blessing Max, he might knock over their pulpit and chew on the altars.  So I'm not too sure.

One day I am going to sponsor a creative outreach involving dogs...I just don't know what it's going to be yet.  My thought is that people love their dogs so much, and if you can do something to bless the dogs,  you can reach the people.   Any ideas?

Unknown said…
From my hometown church in NJ: http://southorange.patch.com/articles/blessing-of-the-animals#photo-2153074

It's actually an annual event on the Church calendar.
10:22 AM

Anonymous said…
I remember a community event that was done, in which they reserved a spot in a park, put a fence around it, and let people bring their dogs to run and play. They got different pet stores to sponsor it - brought in people to help update your pet's tags/registration/etc; free samples of different dog foods; treats for the dogs [of course!]; sample classes from a local obedience school...why couldn't you also add a "blessing of the animals" to something like that as well?
12:35 PM