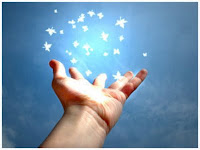 Last night I started a new series in Fusion, called, "22 days of letting go."    We normally have fusion groups but last night God led me in another direction and we didn't have groups, we just hit the altars and God showed up in a big way with people laying down their "Ishmael's" and letting go.
Last night's message was based on the story of Abraham, Ishmael and Isaac.
Genesis 16:1,2
Now Sarai, Abram's wife, had borne him no children. But she had an Egyptian maidservant named Hagar;  so she said to Abram, "The LORD has kept me from having children. Go, sleep with my maidservant; perhaps I can build a family through her."

Abram agreed to what Sarai said.  So after Abram had been living in Canaan ten years, Sarai his wife took her Egyptian maidservant Hagar and gave her to her husband to be his wife.  He slept with Hagar, and she conceived.
The flesh is capable of producing something that will satisfy for a while but in the end it will become a thorn in our flesh.
At first it may even seem like the fulfillment of God’s promise, but anything we have to conjure up is a cheap substitute for what God wants to give us.  I always tell people that if they push doors open in their life they will always have to stand there holding the door.  You'll have to work to keep it open.  But if God opens a door no man can shut it.


We have all produced things on our own because we are tired of waiting.  Or we have held on to things because they are familiar.  When you birth something it's painful to let it go.  It wasn't a walk in the park for Abraham to let go of Ishmael.  It was horrible I'm sure, as he watched him walk away.
It will hurt as you cut away what you have birthed in your life that doesn’t belong there.  You shouldn’t have done it, but you did.  You know you didn't belong in that toxic relationship but you got involved in it anyway.  You know you shouldn't be staying in a toxic relationship but it's comfortable now and you fear being alone.  You might have birthed anger, bitterness, resentment, even attention getting behavior.  You birthed it, it has been your security for however many years. Now, God calls you to let it go and row away from the dock.
It will be painful at first but once you get over the initial pain there is relief, and real life as you walk in blessing and are no longer tied to your Ishmael.