Lessons from Kathryn:
Skin in the game 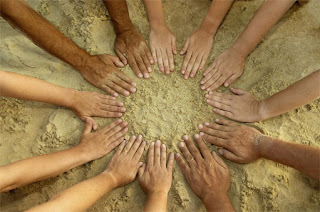 I have been thinking recently about leadership teams I've served on as an adult and what made them effective...or not.  Sometimes you learn as much by an ineffective team as one that works.

On all of the teams where I have served I have been a leader of some sort though not always point person.  Right now in my life I have the best of both worlds as I am the point person for many things as co-pastor of  CC, however I am on the coaching team at NJ and not the boss.

I got to thinking about the subject of passion and drive in serving on a team.  There are times that I've shown up at a meeting on various teams I've served on, only to hear all the plans of something that have been finalized, with no input from anybody on the team.  Basically these could be called, "briefings" not "meetings".  There's no meeting of the minds, no brainstorming, no opportunity to let the creative juices of the team flow...you're just informed of decisions made, given an outline of what's expected of you and go on your way.   I am really sad to say that in years gone by when I first started out leading in ministry, I handled some of my own meetings like that, where I was team leader.  I cringe when I think of some meetings I had.   It's no wonder a few people walked away from me back then.  What reason did they have to stay, really?   They had no skin in the game, no personal investment, no ownership.  They just showed up to hear me tell them what they were going to do...and really, how fun is that?

Then there is the opposite approach where you still have strong leadership, yet shared ownership.  This style of leadership invites input from team members and fully utilizes their gifts.  I'm happy to say this is the kind of leader I've become over the years, and the way I choose to operate within any team that I lead.  I'm sure I've fallen short at times but by and large I try to take this attitude with every single thing I lead at CC.  Rarely if ever do I come to my team members with something solidified.  I'm a person with a lot of creative ideas, sometimes even too many to keep up with.  But I find that every time I get in a meeting with my team, even when my idea is a winner, whatever they contribute makes it so much better.  They point out things to me that I never considered.  They suggest things that take my original idea to the next level.  They prevent me from making some big mistakes!

I'm also blessed to be serving at NJ under this kind of leadership.  In my work there, I want to always be the kind of team member that reciprocates by showing how grateful I am to work in this environment.  Being that I live a dual role as I mentioned before, I understand well the kind of pressure my boss is under.  So,  I don't ever expect things I shouldn't expect!  I know full well who the leader is and don't take advantage, but I appreciate the value that is placed upon my gifts and talents and the invitation to share my feelings and ideas.  There are many times Kathryn will ask me, "so how do you feel about this decision?" and I'll say, "does it matter?  You're the boss...just make the decision" and she usually responds, "well, yes it does matter how you feel.  And I'm interested in knowing if you have another idea that might be more effective."  And she's not just slinging the bull.  She really means it.  Many times quite frankly I don't have an idea that is any better than what she just proposed but I'm really honored that she even cared to ask.  It makes NJ a very pleasant place to be.

Here's a question for all of you leaders out there who are leading any kind of a team...do you invite your team members to have skin in the game?  What incentive is there for them to stay?  Is there opportunity for them to share their creative ideas, thoughts, and feelings?  It doesn't mean that you  have to utilize every one of their ideas, in fact there's no way you can.  We tell our leadership team at CC that as we brainstorm on any given night, probably at least 99 ideas will be rejected!  There are nights we literally look at 100 creative ideas for 1 outreach that we're going to focus on.  Only one idea will be implemented at a time, but the point is, we took time to listen to all of them.  Even if everyone's idea didn't get selected, everyone felt heard.

I believe all these are key ingredients to an effective team.  I love what Rick Warren says, "All of us are smarter than one of us!"

Apple of His Eye said…
Thanks Deanna, I appreciated this today.
Love ya!
LaDonna

Thanks so much for helping me during the Outpouring!
9:30 PM